International community has an obligation to support Pakistan: UN chief 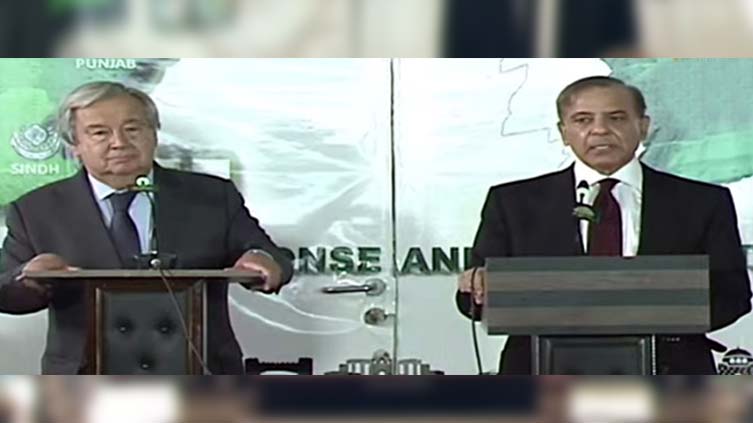 International community has an obligation to support Pakistan: UN chief

UN Chief Antonio Guterres made the remarks during a visit along with Prime Minister Shehbaz Sharif.

ISLAMABAD (Dunya News) - UN Secretary General Antonio Guterres has stressed that there is an obligation on international community to massively support Pakistan to meet the challenge posed by devastating floods.

He made the remarks during a visit along with Prime Minister Shehbaz Sharif to National Flood Response and Coordination Center in Islamabad on Friday where he was given a detailed briefing about the flood situation and rescue and relief activities in the affected areas.

The UN Secretary General said Pakistan has little contribution to global emissions but it is one of the most vulnerable hotspots to climate change. He said the developed countries should drastically reduce emissions and support countries that need to invest in resilience and recovery as is the case in Pakistan.

Commending the generosity of Pakistani towards Afghan refugees, Antonio Guterres said Pakistan is a country in his heart.

Expressing solidarity with the flood victims, the UN Secretary General said he will do his best to raise awareness in the international community about the current situation in Pakistan and to mobilize the full UN system in support of the country.

The UN Secretary General was also appreciative of the rescue and relief activities being carried out in the flood ravaged areas.

While Antonio added Pakistan is not making any significant contribution to the industrial emissions, but it faces major brunt of the climate change. He said especially, the countries that make most of the emissions should do justice by providing massive support to the people of Pakistan to meet this calamity.

The Secretary General urged the global community to mobilize everything possible to support the people of Pakistan as they have lost their houses, jobs, and crops.

Expressing solidarity with the people of Pakistan, he assured that everyone needs to be mobilized to come out of this crisis.

In his remarks, Prime Minister Shehbaz Sharif expressed his gratitude to the UN Secretary General for his message of empathy and support for the people of Pakistan.

The Prime Minister said the federal and provincial governments and all stakeholders including the armed forces are working together to provide relief and rescue to thirty three million affected people. He said our rescue and relief efforts are in full gear and the people have been moved to safe places. He said food and shelter are being offered but the challenge is huge. He thanked different countries and organizations for extending support to Pakistan in this difficult hour.

Shehbaz Sharif said Pakistan’s floods are a glaring manifestation of climate change and it is high time to take notice of the situation.

The Prime Minister said we will soon be entering the reconstruction and rehabilitation phase. He said Pakistan is doing its best with its meager resources but the country will require sufficient support to repair the damaged infrastructure. He said we have an iron resolve to overcome the challenge but we need international support in this regard.

Minister for Planning and Development Ahsan Iqbal said damage assessment studies in the flood hit areas will soon be completed.

Alluding to the devastation caused by the floods, the Minister for Planning and Development said the floods has also affected our economic growth.

Ahsan Iqbal said we are also working simultaneously to prepare a plan to build a resilient infrastructure.