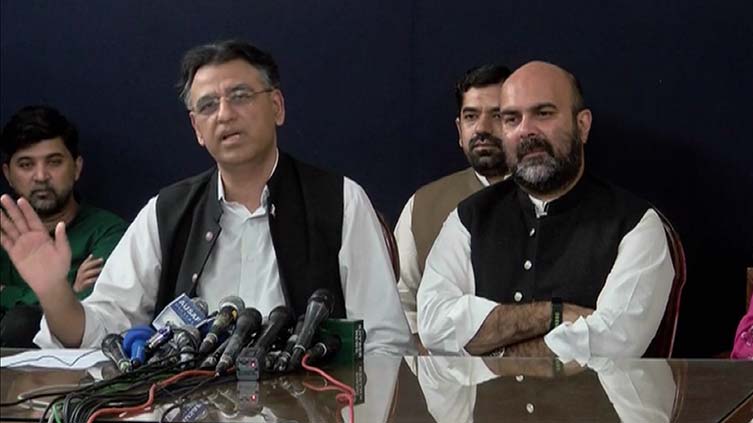 Asad said that anyone with sense cannot negate whatever Shaukat Tarin suggested in the audio.

While talking to media in Islamabad, Asad Umar said that this is not the first time that any kind of audio has been leaked as everyone’s phone has been tapped nowadays. He said, "cut pasting is their (PML-N’s) habit, no one is following the law in this country."

Asad went on to say that anyone with sense cannot negate whatever Shaukat Tarin suggested in the audio.

On the other hand, Taimur Jhagra added that today they are questioning about our loyalty for speaking for the right of the people. "I accept that I wrote the letter, I own it as I have signed on it as well. " he added.

While acknowledging the contents of the letter to Miftah Ismail, Jhagra said he only demanded due funds for erstwhile FATA areas. “We will not compromise on FATA areas as people are living there in miserable conditions,” he said.

Earlier, an audio of PTI leader Shaukat Tarin surfaced in which he allegedly asked Punjab and Khyber Pakhtunkhwa Finance Ministers to backtrack from IMF commitments in order to pressurize federal government.

In alleged audio, Shaukat Tarin said that they need to backtrack from Rs750 billion commitments and tell the lender that the commitment Punjab made was pre-floods and now the province "cannot honor it".

The PTI leader told the finance minister to draft a letter and send it to him for vetting so it could be sent to the federal government and later on to the IMF representative in Pakistan.

At Tarin’s request, Leghari asked whether Pakistan would suffer if Punjab withdraws from the deal.

"Well, frankly isn’t the state already suffering because of the way they are treating your chairman [Khan] and everybody else? IMF will definitely ask them: where will you get the money from now?" Tarin responded.

He further said that Centre is sending PTI leadership to jail and filing terrorism case. Tarin said that this could not go on further and the party could not bear being "mistreated" and not respond. "We cannot be blackmailed.