IMF to release tranche on Monday after board meeting: Miftah 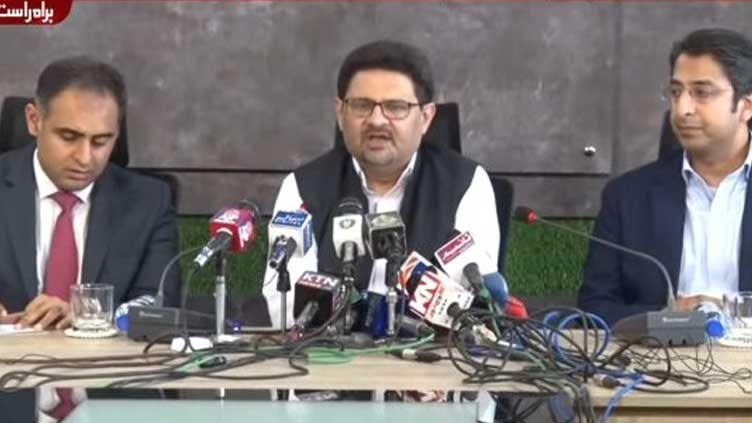 IMF to release tranche on Monday after board meeting: Miftah

IMF to release tranche on Monday after board meeting, says Miftah

ISLAMABAD (Dunya News) – Minister for Finance and Revenue Miftah Ismail Friday said the International Monetary Fund (IMF) would release the tranche (worth US$1.17bn) to Pakistan after its board meeting on Monday.

Addressing a press conference here, the minister said Pakistan had already fulfilled all the requirements of the IMF and it is very likely that the board would approve the release of tranche on Monday (August 29). He said now the $4 billion gap had been bridged as Qatar and Saudi Arabia had also assured new investments and facility of getting oil on deferred payment for Pakistan.

The minister said the visit of PM to Qatar remained successful as Qatar had agreed to make $3 billion investment in Pakistan’s various sectors. Further he also made it clear that there was not discussion or agreement of selling Pakistan International Airlines (PIA) or Roosevelt Hotel to Qatar saying that Qatar was interested in getting only the management control of Pakistan’s big airports.

Qatar is also taking interest to invest in Pakistan’s sea ports, LNG plants for which the Prime Minister had advised to hire an international advisor to get the actual price estimation, he said adding that Qatar was also interested to invest in large scale solar firms. “The government is intended to install solar power plants with installed capacity of 8000 MW, as the solar energy would help generating cheaper electricity for the consumers”, he added. “They (Qatar) also showed their interest to invest in Pakistan’s capital market.”

The minister informed that Saudi Arabia had announced $1 billion investment in Pakistan along with providing oil on deferred payment. Similarly, he said UAE had also announced to invest primarily in government’s shares worth $1 billion.
With respect to the public concerns over extra electricity bills this month, the finance minister said the Prime Minister was very much worried over hike in the electricity bills.

On IMF pressure we had to raise the prices of electricity for all kinds of consumers, he said adding that in May, the electricity demand was on peak due to unprecedented hot weather condition and for this reason the government had to run even the most expensive power plants run by the furnace oil which cost around Rs 59 per unit.

He said the impact of that month’s fuel price adjustment (FCA) was showed in current month. He said on the PM’s advice, he talked to the IMF that Pakistan government would protect those consuming up to 200 units of electricity a month. He said the IMF had agreed to the Pakistan’s request in this regard.

Miftah Ismail added that 56% or 17.1 million out of around 30 million electricity consumers would be exempted from the fuel adjustment. He said the government would have to bear Rs 20 billion cost in this regard. He asked the such consumers not to pay the current bills as a new bill would be issued soon in which there would be no FCA. He informed that the PM had formed another committee which would deliberate upon giving FCA exemption to those consuming 200 to 300 units of electricity.

With regards to recent flood in Pakistan, the minister also thanked World Bank which had provided Pakistan, a financial assistance of $370 million and this amount would be received in a couple of days.

Similarly, he said Asian Development Bank (ADB), European Union (EU), USA, China and other development partners have assured financial support for flood victims. He also urged the common people to contribute in the PM special fund made for the flood victims.

Ismail said the finance division had already issued Rs 28 billion to Benazir Income Support Programme (BISP) for payment of Rs 25000 to each beneficiary in flood hit areas. Likewise, Rs 5 billion have been issued to National Disaster Management Authority (NDMA), who would also compensate the flood victims.