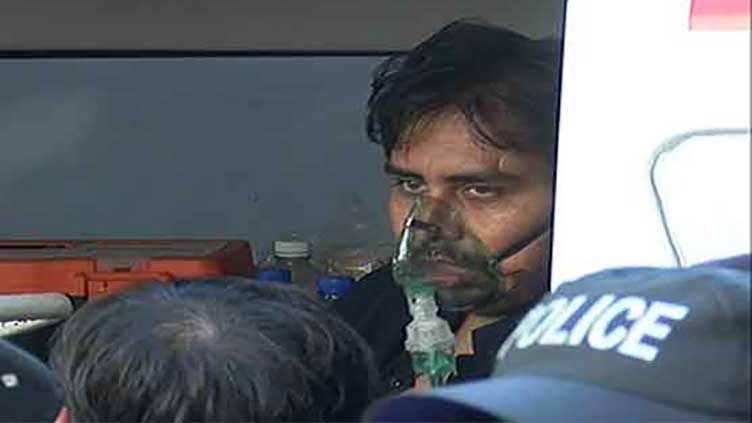 Shahbaz Gill was presented before an Islamabad district and sessions court after being declared physically fit by the Medical Board of PIMS hospital.

The police has filed petition to approve Shahbaz Gill’s eight more days of physical remand. The Court inquired whether the police is seeking a fresh remand or an extension of the earlier one.

In this regard, the judge further remarked that has the police been able to investigate in two days or not?

Considering the apparent condition of the PTI leader, it was directed by the court to immediately apply mask and oxygen to Shahbaz Gill.

The Court further rejected the 8-day remand plea along with directing to conduct the PTI leader’s medical checkup again, adding that Gill will be hospitalized till Monday for the re-medical examination.

While in a report by the Medical Board of the PIMS hospital, the doctors had declared Shahbaz Gill fully fit and further stated that Shahbaz Gill has not been tortured.

The report added that the PTI leader’s health deteriorated due to the illnesses in his past medical history and therefore, the medical team unanimously decided to discharge him.

Eralier, the Islamabad High Court (IHC) on Thursday ordered the Inspector General of Police (IGP) Islamabad to probe into the alleged torture on former SAPM and PTI leader Shahbaz Gill.

The chief of staff of the former prime minister and PTI chairman, who was arrested by Islamabad police in a sedition case last week, had been handed over to the Islamabad police late on Wednesday, following the order of the sessions court.

Acting Chief Justice of the IHC Justice Amir Farooq took up the case filed by the counsel of the PTI leader alleging torture in police custody.

During the proceedings, the court summoned the IG Islamabad to the rostrum and asked if Gill was tortured in police custody to which he said that there was no truth in the allegations of torture on Shahbaz Gill.

The court ordered the IG Islamabad to investigate torture claims.