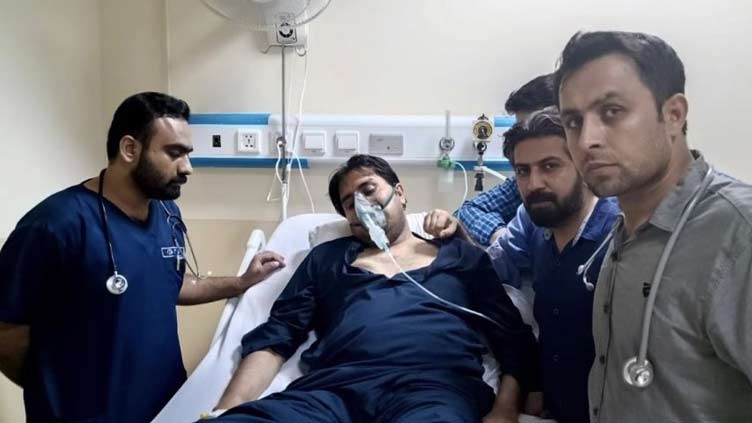 Gill's ECG was not normal as anxiety can also trigger heart palpitations.

ISLAMABAD (Dunya News) - Pakistan Tehreek-e-Insaf (PTI) leader Shahbaz Gill’s current situation is stable and he is not diagnosed with a heart problem. Last night his ECG was not normal as anxiety can also trigger heart palpitations.

The PTI leader was shifted to PIMS under high alert security while a medical team has been formed comprising heart, lung specialists doctors and medical officers.

Earlier, Shahbaz Gill had been handed over to Islamabad Police from Adiala Jail Rawalpindi authorities.

It should be noted that the federal government decided to send Rangers to bring Shahbaz Gill.

According to the Ministry of Interior sources, a contingent of Rangers was directed to reach Adiala Jail, for the extradition of Shahbaz Gill while the Federal Police and senior officers were already there.

In this regard, it was further informed by the sources that all the officers of Rawalpindi Police were also present there along with their personnel.

Sources privy to the matter said that Imran Khan ordered to create an emergency situation to immediately shift Shahbaz Gill to a hospital.

The former PM was told that this is illegal and cannot be done but he responded by saying that he does not care about the results.

PTI files fresh petition in IHC against torture of Gill

PTI on Thursday filed a fresh petition in Islamabad High Court (IHC) against the torture being inflicted on PTI leader Shahbaz Gill in the jail.

The petition has been filed by PTI leaders Asad Umar and Babar Awan.

The petitioner has pleaded for the formation of a medical board to conduct the medical examination of the PTI leader Gill by unbiased doctors.