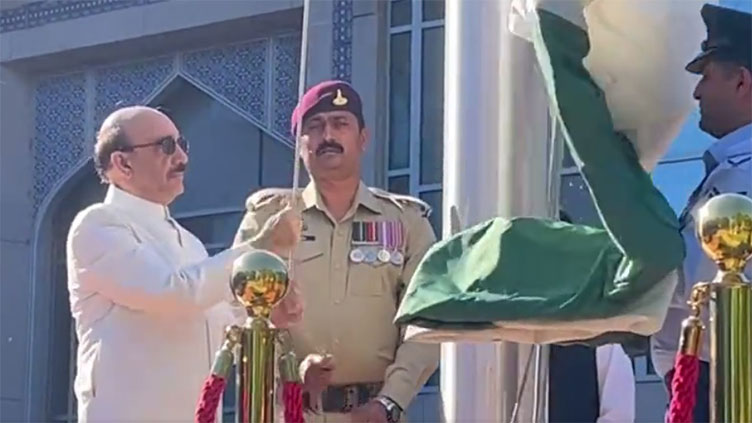 WASHINGTON (Dunya News) - A flag hoisting ceremony was held at the Pakistan Embassy in Washington on Sunday to mark the Diamond Jubilee Celebrations of Pakistan s Independence Day.

The ceremony was attended by senior officials of the US State Department, foreign guests and a large number of members of Pakistani community, living in the United States.

At the outset of the ceremony, the Independence Day messages of the President of Pakistan and the Prime Minister of Pakistan were read. Pakistan’s Ambassador to the United States Masood Khan hoisted the Pakistani flag to the tune of the national anthem.

Speaking on the occasion, the Masood Khan said that establishment of Pakistan was a miracle, which was possible due to the eternal sacrifices of our forefathers and the Muslims of the subcontinent. He said the journey after independence was not easy. However, we faced all adverse situations with great courage.

The ambassador said there are challenges before us but we are confident that we will overcome these problems and emerge as a strong and prosperous nation. Masood Khan said that nation is also celebrating the 75th anniversary of Pakistan-US relations along with the Independence Day of Pakistan.

He said the United States was the first country to recognize Pakistan. After the establishment of Pakistan, the then US President Harry Truman, in his letter, expressed his best wishes to Pakistan for forging close and friendly relations between the two countries. He said Founder of Pakistan Quaid-e-Azam, in response to this letter, reiterated Pakistan s strong resolve of friendship and goodwill in its true spirit.

The Ambassador said Islamabad and Washington enjoy strong partnership between the two countries in various sectors, including trade, investment, regional relations, energy, education, health and public relations, which is being further promoted.

Beside others, recipient of Lifetime Achievement by the US President and expert in speed learning and mind mapping Sania Alam and world-renowned K2 climber Dr. Qaisra Saeed also addressed the ceremony.