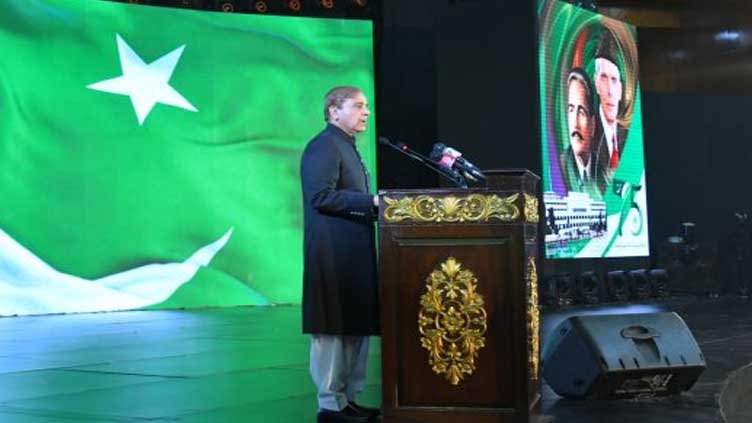 ISLAMABAD (Dunya News) - Prime Minister Muhammad Shehbaz Sharif on Sunday stressed holding a national dialogue and developing a consensus on the charter of the economy by all the stakeholders to transform Pakistan into an economic power.

Addressing a national flag-hoisting and unveiling of a re-recording ceremony of the national anthem here at the Jinnah Convention center, the prime minister said that like their forefathers, on this 75th Independence Day, they vowed to transform Pakistan into an economic power.

“If we can become a nuclear power, we can also become an economic power but for it, we have to strive day and night and prove to the world that we are no less than anyone in the world,” the prime minister added.

The ceremony was attended by federal ministers, parliamentarians, senior military and law enforcement agencies leadership and people belonging to all walks of life.

“Pakistan Movement is a lesson for everyone which tells when a nation devised the course of its path, the mountain-like hurdles and seas like distances could not hamper them from achieving their goal,” the prime minister added.

The prime minister recalled that when Allama Iqbal dreamt about a separate motherland, a sense of pessimism was created that it was not feasible.

“We salute the founding fathers of Pakistan who had smashed such sense of pessimism and due to their historic struggle, they are now breathing in an independence and sovereign country,” he added.

The prime minister said for decades, the Muslims in the sub-continent faced foreign subjugation, they laid down their lives, gave immense sacrifices and made a historic migration and lost their near and dear ones in that perilous journey to achieve a separate country.

They handed over an ideological country, he said and paid tribute to all those that lost their lives in the Independence Movement.

He said the creation of Pakistan was a sacred trust and mission, the first phase of which was completed, but its second phase was still incomplete. “The mission is to give practical shape to those ideals which were reflected in March 23rd Resolution,” he added.

He said that on its independence, Pakistan was deprived of its due shares, but despite all those odds it made excellent progress in different fields as being the 7th in the world and 1st nuclear power of the Islamic world.

Late Zulfikar Ali Bhutto started the nuclear programme, and he realized it, he maintained.

The prime minister said Pakistan had been playing a key role in the UN peacekeeping missions, its players had raised the national flag in different games.

“It is a fact that we have made progress in different arenas, but with the speed which with we have to achieve that mission, there were shortfalls which should be overcome,” he stressed.

He also underlined the need for retrospection and reflection on the past history of the country by rectifying the mistakes.

The prime minister resolved that for making Pakistan an ideal nation-state as dreamt about by the founding fathers, they would be ready to shed the last drop of their blood, foil enemies’ designs with the support of the brave armed forces and harness the true potential of youth to lead the future way.

The prime minister said that they were thankful to Allah Almighty for observing the 75th-anniversary celebrations and lauded the contributions made by the Pakistani expatriates and their valuable part in the development and prosperity of the country.

He also prayed for the liberation of Indian Illegally Occupied Jammu and Kashmir (IIOJK) and Occupied Palestine from the illegal foreign occupation.

The prime minister expressing his deep grief and sorrow over the recent losses in the flash floods, said the recent rainfalls caused destruction and huge losses in different parts of the country, especially in Balochistan as hundreds had lost their lives and children were left orphans. He prayed for the early recovery of the injured.

The prime minister said on this day, that they also acknowledged the contributions of civil society members like the late Abdul Sattar Edhi and Dr Ruth Pfau.

The prime minister also highlighted the minorities’ role in Pakistan Movement and appreciated their sacrifices.

He said Quaid-e-Azam Muhammad Ali Jinnah had stressed religious freedom in the newly created Pakistan as there would be the rule of law, constitution and democracy.
He said the government accorded high priority to realising the true potential of the country’s youth and expressed the optimism that the youth would steer the future course of the country’s progress and prosperity by following Quaid’s principles of unity and discipline.

He urged them to transform Pakistan into an ideal state and economic power hub and accomplish the mission of its forefathers by discarding the begging bowl.

The prime minister also expressed his pleasure that the national anthem was re-recorded after 68th years, which was a beautiful bouquet of the national culture and appreciated the efforts of the ministry of information, ISPR and others for its re-recording.