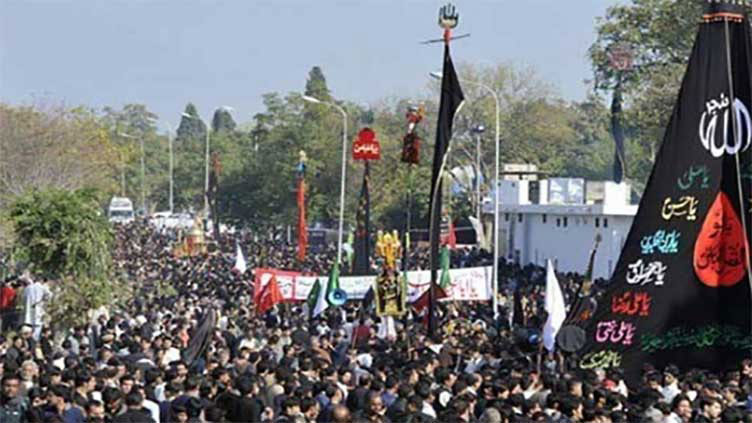 Taazia and Zuljanah processions were taken out in all major cities and towns.

ISLAMABAD (Dunya News) – Youm-e-Ashura, the tenth of Moharram, was observed across the country on Tuesday with due solemnity to pay homage to the supreme sacrifice rendered by Hazrat Imam Hussain (RA) and his devoted companions in Karbala.

Various processions were taken out in different cities and thousands of security personnel were deployed to protect the mourners of the seventh-century martyrdom of Hazrat Imam Hussain (RA), the grandson of the last Prophet Hazrat Muhammad (PBUH).

The mourning processions were taken out in all the cities and towns of the country as Muslims were performing mourning rituals to mark the Ashura.

Strict security measures were ensured by the local management of different cities and some road closures were also in place to avoid any untoward incident.

Law enforcers, including police, Rangers, FC and others have been deployed along the procession routes. The azadars (mourners) paid glowing tribute to sacrifices offered by Hazrat Imam Hussain (RA) and his companions for the supremacy of Islam.

Ulema and Zakireen highlighted the bright and candid teachings of Hazrat Imam Hussain (RA) and various aspects of Karbala tragedy.

Medical camps, Sabeels and stalls were also provided drinking water and food items to the participants. Mobile phone services were partially suspended as a security measure in different cities.

President Dr Arif Alvi in his message said the supreme sacrifice of Hazrat Imam Hussain (RA) was a beacon of light for the Muslims and it carried the message that against the apparatus of oppression and tyranny one should be the flag-bearer of truth and righteousness.

In a message on the occasion of Youm-e-Ashur, he said in the Islamic history, Muharram-ul-Haram was a month of respect, dignity and blessings. Hazrat Imam Hussain (RA), his family and loyal companions set a great example of bravery, courage and sacrifice, and gave a new life to Islam with their blood, he observed.

Prime Minister Shehbaz Sharif said Islam was alive because of the sacrifices of Hazrat Imam Hussain (RA) and his companions and these sacrifices give courage and hope to the faithful in the face of difficulties and challenges.

In a message on the occasion of Youm-e-Ashur, he said this day reminded of the unparalleled struggle between good and evil, when a group led by Hazrat Imam Hussain (RA) refused to show allegiance to evil and stood before a seemingly powerful faction.

In Islamabad, the main procession emerged from Imam Bargah Qasr Zainibia in G-6/4 and culminated at Imam Bargah Asna Ashri in G-6.

In Rawalpindi, the main Alam and Zuljinah procession was taken out from Imam Bargah Colonel Maqbool Hussain which culminated at Imam Bargah Qadeemi while passing through the designated routes. Over 2,500 security personnel were deployed to guard the main procession while 3,500 cops also provided security cover to other processions and majalis of the district.

Besides, different processions emerged from various parts of the city and merged into the main procession.

Elaborate security arrangements have been made to avoid any untoward incident during the processions. Over 6,000 security officials have been deployed to ensure security.

In Lahore, the main mourning procession was taken out from Nisar Haveli in Mochi Gate, which after passing through its traditional route culminated at Karbala Gamay Shah in the evening, where Shaam-e-Ghareeban was held.

Overall 170 processions and 130 majalis were arranged in Multan district. The main procession was taken out from Imam Bargah Heera Haidri in the morning which culminated at Ghanta Ghar in the evening after passing through its traditional route.

In Karachi, the main procession was taken out from Nishtar Park after Majalis in the morning. After passing through its traditional route, the procession was culminated at Imam Bargah-e-Hussainan Iraniaan Kharadar in the evening.

In Quetta, the main mourning procession of Alam, Tazia and Zuljanah was taken out from Nichari Imam Bargah at Alamdar Road this morning, which culminated at the same place in the evening after passing through its traditional routes.

In Gilgit, Ashura procession was brought out from Markazi Imamia Masjid this morning which culminated at same place in the evening.

In Muzaffarabad, the main Tazia, Alam and Zuljinnah procession was taken out from Markazi Imam Bargah Pir EIam Shah Bukhari.

Elaborated Security measures have been put in place across the country to ensure secure and smooth movement of processions and holding of Majalis.