Anyone tried to take law into hands will be dealt with an iron hand: Rana Sanaullah 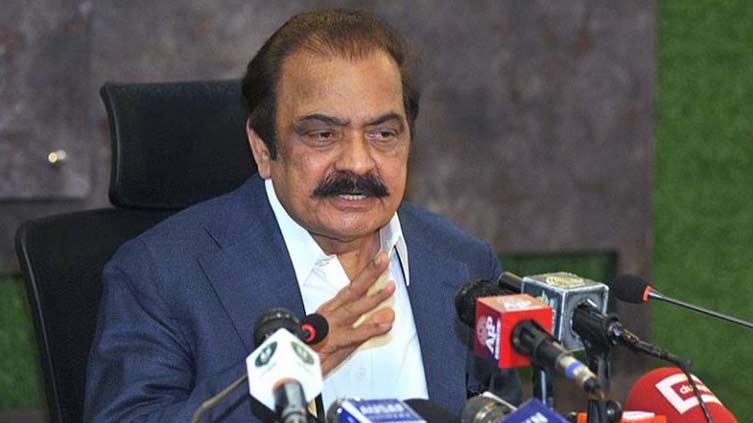 Anyone tried to take law into hands will be dealt with an iron hand: Rana Sanaullah

Anyone tried to take law into hands will be dealt with an iron hand, says Rana Sanaullah

FAISALABAD (Dunya News) – Interior Minister Rana Sanaullah on Monday said that martyrs of Pakistan army were symbol of respect and dignity and the entire nation saluted their unprecedented sacrifices.

Appreciating the role of Pak army in war and peace, the minister said that during national calamities the army stood with the masses to give them much-needed relief. It was only due to their sacrifices that the nation had inherent love for the Pak army, he added.

He said that families of the martyrs had great esteem and he would be pleased to serve the families of martyrs if they had any problem.

Responding to a question about negative propaganda against the martyrs, he said that each and every patriotic Pakistani loved Pak army but a smear social media campaign was launched with ulterior motives to divide the nation. It was a deep-rooted conspiracy which might push the country towards a major setback if immediately remedial action was not taken, he added. He said that it was only due to the sacrifices of the martyrs that such elements defaming Pakistan army had been exposed and every Pakistani was condemning their action.

He said that Imran Khan had emerged as a foreign agent as the decision of Election Commission of Pakistan (ECP) had clearly indicated that he had been receiving dollars from the foreign and hostile countries.

Responding to a question, the minister said that Fawad Chaudhry had given a statement in his favor and now he was satisfying PTI leaders by hurling allegations.

He said that federation and provinces were part of a system. “We acknowledge rights of the provinces and the provinces should also respond in the same spirit,” he added.

He said that Imran Khan had said that he would hold a protest demonstration in Islamabad on August 13 in which he would give government a one-month ultimatum to announce for the general election. The minister said that Imran Khan should first remove the Chief Election Commissioner upon whom he had expressed ‘no trust’. When new election commissioner would come, then he should demand for fresh election, Sanaullah added.

He said peaceful protestation was the right of every political party and they were allowed to hold public gathering but if anybody tried to take law into hands, he would be dealt with an iron hand.

Responding to a question, he said the FIA was conducting two inquiries. One was regarding negative social media campaign against the martyrs. "We have included civil and military officials in this inquiry team," he said and added that the second one was relating to the decision of Election Commission of Pakistan on foreign funding case.

To a question, Rana Sanaullah said that TLP intended to observe sit-in at Faizabad Chowk which could not be allowed. However, they could hold peaceful protestation in Liaqat Bagh, H-9 or Play Ground which had been allowed by Islamabad High Court for this purpose. However, the protestation should be under certain conditions and in case of violation an action would be taken against the responsible, he added.

He clarified that no one would be allowed to close down the busy crossings which might cause problems for the general public.

Regarding Tosha Khana, the minister said that Imran Khan had stolen many things from the Tosha Khana. He deposited 20 % amount and sold out the same items in the open market at high rate which also brought diplomatic humiliation for the country. He said that the profit earned from this deal was not reflected in the assets of Imran Khan.

Earlier, the minister also visited the residence of martyred Brigadier Muhammad Khalid and condoled with his brother Muhammad Faisal and other family members. He also prayed rest for the departed soul and patience for the bereaved family.