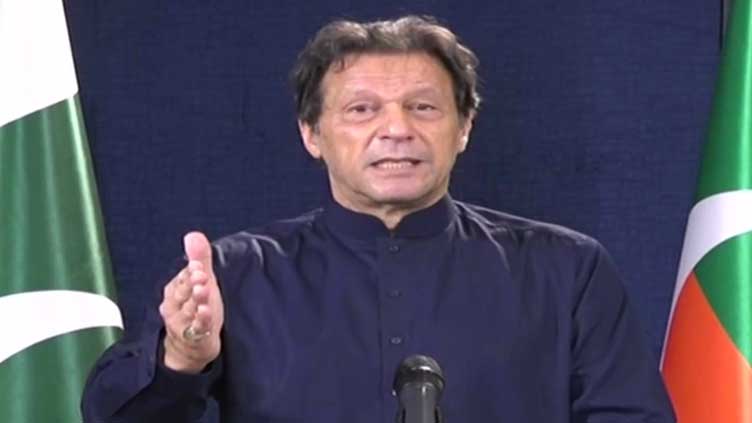 ISLAMABAD (Dunya News) – Pakistan Tehreek-e-Insaf (PTI) supremo and former Prime Minister Imran Khan on Thursday said he did nothing wrong in collecting funds for the party, and the government is using the Election Commission of Pakistan (ECP) after all other tactics failed.

While addressing his party workers at the F9 Park via video link, Imran said Islamabad has been made a fortress as if someone is attacking from outside, the constitution allows us to protest peacefully but It seemed as if an enemy army had come, adding that  PTI always hold protest within the constitutional limits.

“The Punjab administration was getting secret help in the by-elections but they lost the elections despite the rigging when all these tactics failed, they finally used the Election Commission,” he said.

Regarding the recent ECP verdict, the former PM said that the ECP took decisions beyond its limits, adding that the rulers have made the Election Commission the way through which governments are controlled. “I have been pushing for electronic voting machines for two and a half years and if EVM is introduced the game of secret hands will end when the voting ends,” he added.

“PTI is the only party which started political fund-raising, and political parties in the world do fund-raising. Fund raising details of PPP and PML-N should also be brought forward,” he demanded.

There is a difference between an affidavit and a certificate. Shahbaz Sharif said in the court that Nawaz Sharif will return. It is called an affidavit. The meaning is completely different, Shaukat Khanum s annual budget is approximately 16 billion rupees, according to the Financial Times, crores of bribes were given to the Sharif brothers and they did not pay any attention,” the PTI chairman said.