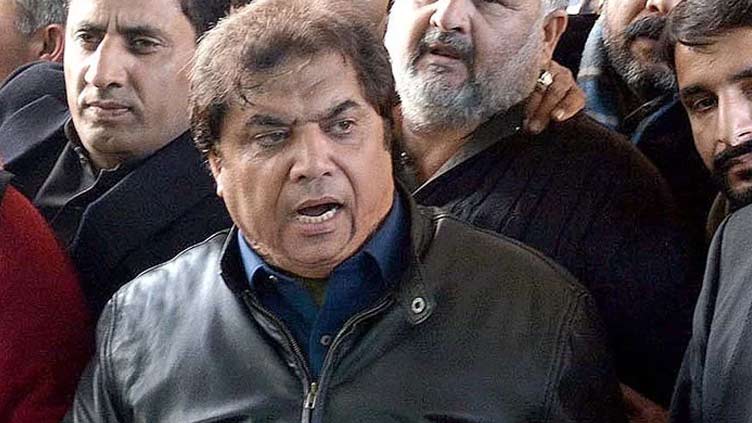 RAWALPINDI (Dunya News) – Pakistan Muslim League-Nawaz (PML-N) Leader Hanif Abbasi on Tuesday said he would file a reference in the apex court after consultation with his lawyers on Pakistan Tehreek-e-Insaf (PTI) prohibited funding case to probe the matter in detail.

"Today s verdict of Election Commission of Pakistan (ECP) has proved that Imran Khan is a certified liar," he said while addressing a press conference here.

Abbasi said as per verdict of the commission the PTI had received amount of billions of rupees from foreign based companies.

Despite the fact that some 16 unnamed accounts were not disclosed by the PTI and Imran still reluctant to accept that his party had received funds from abroad, he said.

According to the electoral watchdog s verdict the PTI received funds from 34 foreign nationals and business tycoon like Arif Naqvi.

"Pakistan will not have been in such a state if Nawaz Sharif s government had not been toppled," he remarked.

Abbasi said today was the most important day in the political history of Pakistan, as such a politician of Pakistan was going to be disqualified who not only made false claims to the people but also created a storm of abuse on social media against the state institutions.

"Pakistan Tehreek-e-Insaf is making fabricated stories against other political parties and government should take action on what is happening on social media," he added.

He said Imran Khan had showed people the dreams of  Rayisat-e- Madina  but election commission had proved his dishonesty after he had submitted a fake affidavit before the commission.

Abbassi said the PML-N took difficult decisions to put the country on path of progress, adding that Prime Minister Mian Muhammad Shahbaz Sharif was making all out efforts to steer the country out of economic crisis.

To a query, he asked the Awami Muslim League (AML) chief Sheikh Rashid to face him in next general elections for a humiliating defeat.

Meanwhile, he expressed his deepest condolences over the martyrdom of Pakistan Army officers who lost their lives in the tragic helicopter accident in Balochistan.