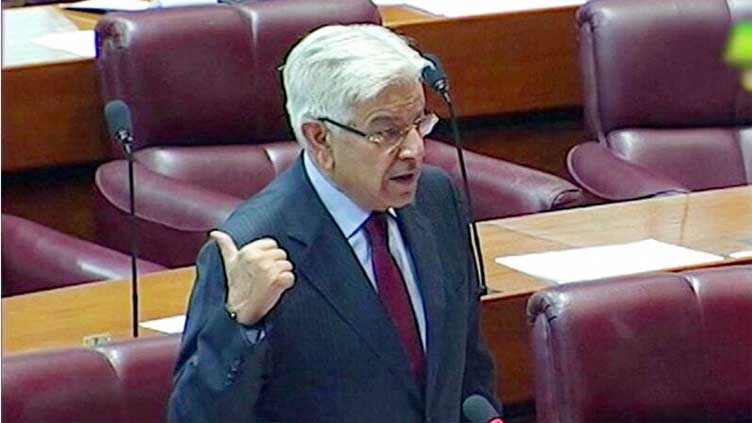 ISLAMABAD (Dunya News) - Defence Minister Khawaja Muhammad Asif on Tuesday while reacting to the Election Commission of Pakistan (ECP) verdict over PTI prohibited funding case urged the executive to refer the matter pertaining to PTI’s prohibited funding to the judiciary for further action.

Speaking in National Assembly on Tuesday, he said the judiciary should assess the evidence mentioned in the decision of the Election Commission of Pakistan regarding foreign funding of the PTI. He said the judiciary should decide the matter on merit to uphold the law and constitution as well as to end the culture of abusive language and unconstitutional acts. He said the ECP today fulfilled its responsibility by declaring that PTI had received prohibited foreign funding.

He said Imran Khan is a foreign funded agent, who harmed and maligned the state institutions. He said what an irony it is that institutions are fine if they support him and he starts hurling abuses on them if they will withdraw their support.

Quoting ECP’s decision, the Defence Minister said it has now been proved that Imran Khan accepted funding from foreign countries, including the United States, Canada, India, Israel and the United Kingdom. He said this case is a bright example of money laundering. He said it will be a great tragedy to Pakistan if Imran Khan goes unscathed.

Khawaja Muhammad Asif said now it is responsibility of the parliament and other institutions to play their due role in upholding the constitution, and social values of our society.
He also paid rich tribute to the army officers for their supreme sacrifice during flood operations in Balochistan.

The House unanimously passed a resolution, expressing solidarity with the flood-affected people.

The resolution, moved by Maulana Abdul Akbar Chitrali, called upon the government to expedite the rescue and relief efforts in the flood-hit areas across Pakistan. It said the flood affected areas should be declared as calamity-hit and concerned Member National Assembly should be taken on board in the relief work in an area.

The chair referred the bills to the standing committees concerned.