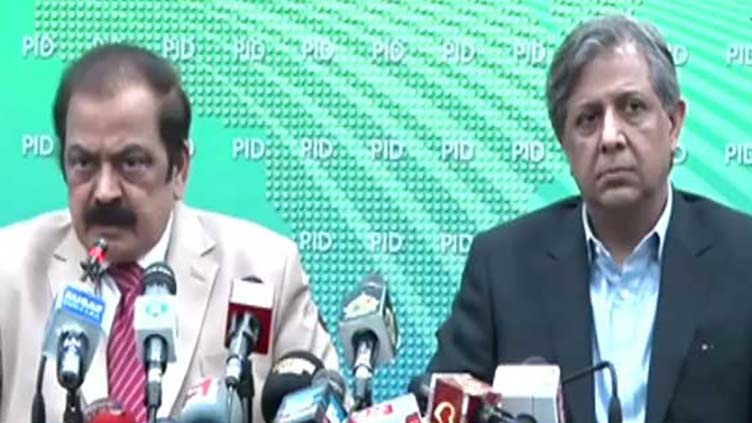 While holding a press conference with Rana Sanaullah, Azam Nazir Tarar said that former prime minister Imran Khan has done his politics with funds worth millions of rupees.

The ministers said it would also be seen whether other party members would also be disqualified, adding that the PTI chairman should be banned for life for concealing the facts.

While appealing to the Supreme Court, the PML-N leaders said that the full SC bench should hear the matter.

Azam Nazir Tarar has asked Imran Khan to apologize to the country and resign following the Election Commission of Pakistan (ECP) verdict on the prohibited funding case.

Taking a dig at Imran Khan, Tarar said that he used the donation money for politics. Tarar said that every political party has to report expenditure, income and resources to the ECP.

Taking a swipe at the former prime minister, the interior minister said the PTI chief used charity money for politics.

Imran Khan should apologize to the country for today’s decision of Election Commission and resign, Rana asked the former premier.

Apart from this, Rana further said that the information has just been received that the senior officers of the Pakistan Army aboard the missing helicopter have been martyred.

The Federal Interior Minister prayed for the upliftment of the ranks of the officers and staff of the Pakistan Army who were martyred in the helicopter incident.

He said that when the helicopter went missing yesterday, the entire country was praying for the safety of its Army brothers. The Interior Minister prayed that Allah Almighty would give courage and strength to the families of martyrs to bear this trauma.

Rana said that in the Holy Quran, there is a clear command of Allah Almighty about those who sacrificed their lives for the country that, "You should not call them dead, they are alive, but you do not know about it". He said, "This shock is unbearable for all of us."