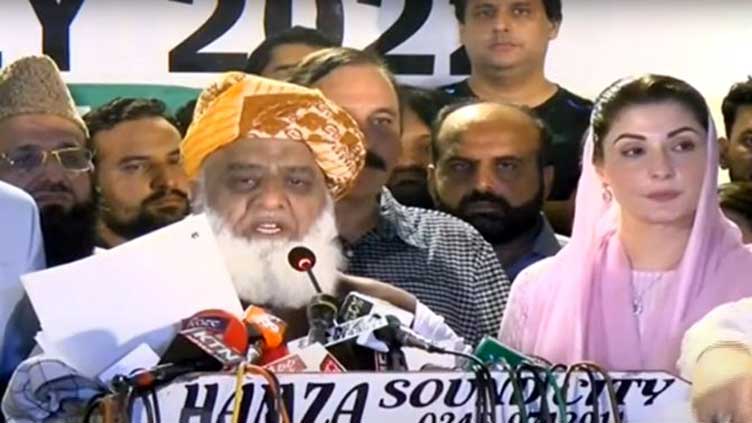 ISLAMABAD (Dunya News) – Pakistan Democratic Movement (PDM) chief Maulana Fazlur Rehman on Thursday urged the federal government to send a presidential reference to the Supreme court to constitute a full court for the interpretation of Article 63-A of the Constitution.

Addressing a press conference along with PDM leaders after chairing a high level meeting, he informed the media about key points of the discussion during the sitting as well as the two resolutions adopted unanimously by the forum.

Fazlur Rehman reiterated that the coalition government would complete its constitutional term and the next general election would be held on time.

He said, the alliance demanded the Election Commission of Pakistan to immediately announce its verdict on the prohibited funding case of Pakistan Tehreek-e-Insaf (PTI).

While talking about the apex court verdict over Punjab Assembly deputy speaker Dost Muhammad Mazari’s ruling, he said that the recent court decision has created a severe political turmoil which is also flaming the existing economic crisis, adding that Bar associations, media, civil society did not agree with the court’s decision. The presidential reference should be sent to the Supreme Court so that a full court can be formed to get the interpretation of Article 63-A’s interpretation.

Fazl-ur-Rehman said the meeting had declared that the Constitution of Pakistan clearly defined the domains of three state organs, including the legislature, the executive and the judiciary. “Under the constitution, no institution can interfere in the affairs or perform the responsibility of others,” he added.

The meeting was unanimous that “two different interpretations of Article 63-A came to the fore in the apex court’s verdicts” in the cases related to the National Assembly and Punjab chief minister’s election, which had proved correct the concerns of civil society, legal fraternity, media and political parties, he said.

Maulana Fazl maintained that the apex court’s verdict turning down the Punjab Assembly deputy speaker’s ruling had not only created “constitutional and political crises” but also led to political instability in the country.

He said the Supreme Court Bar Association and other lawyers organizations across Pakistan, eminent jurists, media and civil society also disagreed with the decision.