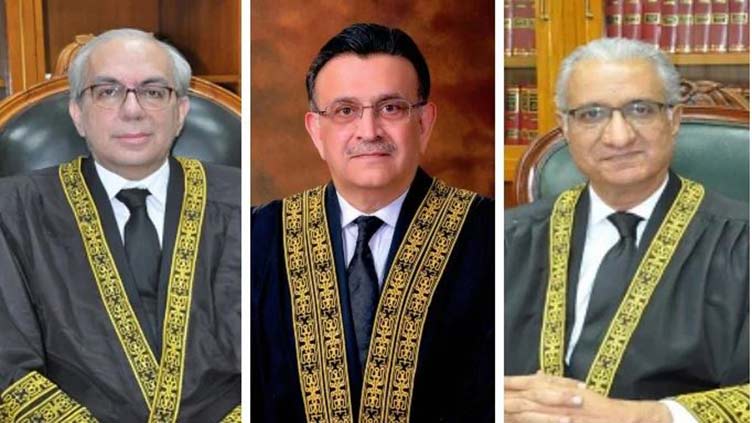 ISLAMABAD (Dunya News) - Supreme Court of Pakistan (SC) on Monday rejected coalition parties’ plea to form a full court bench related to the recently held Punjab chief minister’s re-election case, saying that the court will have to hear more arguments before it takes a decision in this regard.

Chief Justice of Pakistan Umar Ata Bandial said that the court needs more legal clarification regarding the formation of a full bench to issue a verdict on the case.

The CJP also adjourned the hearing tomorrow till 11:30am.

Announcing the verdict after the break, the Supreme Court of Pakistan rejected the request of government allies and the Pakistan Democratic Movement (PDM) to form a full court, saying that the existing three-member bench will hear the case.

The apex court remarked that “We will hear the case on merit, we have examined the matter, and approve the pleas of Chaudhry Shujaat and PPP to become parties while going forward, we will see what the full court bench has to do.”

Federal Law Minister Nazir Tarar contended that “We have these orders in this regard, the matter should be heard in the full court and I requested that the creation of a full court bench would increase judicial respect. If the revision is approved, the matter will go back to the previous situation.

“We have sent the prime minister home with five judges at that time you [coalition parties] were celebrating and now you are standing against this,” the chief justice said, adding that if this matter crosses the limit, then a full court will be formed.

Justice Ahsan reiterated that the decision to form a full court will be taken on merit; meanwhile, Law Minister Azam Nazeer Tarrar asserted that there is enough clarification in this regard.

Earlier in the day, the SC had reserved the verdict on the petitions filed by Chief Minister Punjab Hamza Shahbaz and other bar associations — seeking the formation of a full court for the hearing of the case — after it heard arguments from party lawyers.

However, the CJP gave a break of an hour-and-a-half on the petition of Elahi, which challenged Punjab Assembly Deputy Speaker Dost Muhammad Mazari’s ruling in the CM elections.

Mazari had dismissed PML-Q s 10 votes after party head Chaudhry Shujaat asked them to vote in favour of Hamza, but they did not follow his instructions.

But the PTI and Elahi did not accept this and approached the top court.

After the hearing resumed, Advocate Latif Afridi appeared on behalf of the bar councils and reiterated their demand that the full court hears the matter.

At this, CJP Bandial said that he was honoured that the former SCBA chief had put the matter before him, but noted that the court would decide after hearing all parties in the case.

CJP Bandial said that he did not want to issue a one-sided order and neither would he arrive at a decision under the advice of 10 former presidents.

"We need to hear the other side of the story as well," he said. At this, Afridi said that a full bench should be constituted and the available judges should be included.

Moving on, PPP lawyer Farooq H Naik said that he has requested to become a party in the case, at which the CJP told him that let the initial matters be wrapped up first.

"We will hear you, but let the proceedings move in line with the order. Please sit, I hope that your seat will be vacant," the CJP told Naik.
In response, Naik told him that "seats come and go".

During the proceedings, SCBA President Ahsan Bhoon said that he could not "imagine" pressurising the court, but noted that the review petition on Article 63A should be heard.

Barrister Ali Zafar — who is representing Elahi in the case — said that he has also remained the president of the bar. "The bar presidents should not be involved in such matters."

Deputy Speaker Mazari’s lawyer, Irfan Qadir, too, when he came to the rostrum, said that since there are several confusions over the matter, a full bench should hear the case.

Then, Mazari’s counsel read out the court’s order issued on July 23. At this, the CJP asked the lawyer how the deputy speaker concluded that the court’s order on Article 63 (A) gives the impression that it speaks about the party head.

"This question is for you [and] that is why a special bench has been formed. The question here is what happens when the party head and the parliamentary party’s decisions differ?"

Qadir said that it was not his job to define what questions arise here, but it was the court’s task. At this, the CJP asked him to read out Article 63 (A).

The CJP then said that the article mentions the party head and the parliamentary party.

"I am extremely confused as to what the question is here? I cannot understand what’s the question?" he asked.

The CJP then said that maybe the lawyer was having trouble hearing the judges and warned him that he would be asked to sit at his seat if he cuts off any judge while they are speaking.

Justice Ahsan asked if the same person can issue declarations and instruct a parliamentary party at the same time. At this, Qadir said that the political parties’ rights have been mentioned in the constitution.

Justice Akhtar then said that the deputy speaker issued the directions — during the Punjab CM election on July 22 — under the SC’s ruling in the Article 63(A) case.

"There is no confusion in this case anymore, let someone else speak now," Justice Akhtar added.

At the outset of the hearing, the bench called former Supreme Court Bar Association (SCBA) president Latif Afridi to the rostrum.

The chief justice observed that several former SCBA presidents were present in the courtroom. The ongoing case was directly related to the SC’s interpretation of Article 63-A, he remarked.

“Our former presidents held a meeting. The SCBA’s petition for review [of the Article 63-A interpretation] is pending adjudication,” he informed the court.

Meanwhile, Afridi pointed out that cases challenging the Election Commission of Pakistan’s (ECP) decision to de-seat lawmakers over defection were also being heard.

A full-court bench should be formed to avoid a constitutional crisis, he requested the court. “The crises are deepening. The entire system is at stake.”

He requested the SC to form a full-court bench to hear all the cases together.

The deputy speaker’s lawyer, Irfan Qadir, also requested the court to constitute a full bench. At this, the CJP asked him the grounds on which a full court bench should be constituted.

Qadir requested the bench to read paragraphs one and two of its decision on the presidential reference seeking interpretation of Article 63-A, stating that everything would then be clarified.