What would Pervaiz Elahi do if five MPs didn't show up on July 22: Rana Sanaullah 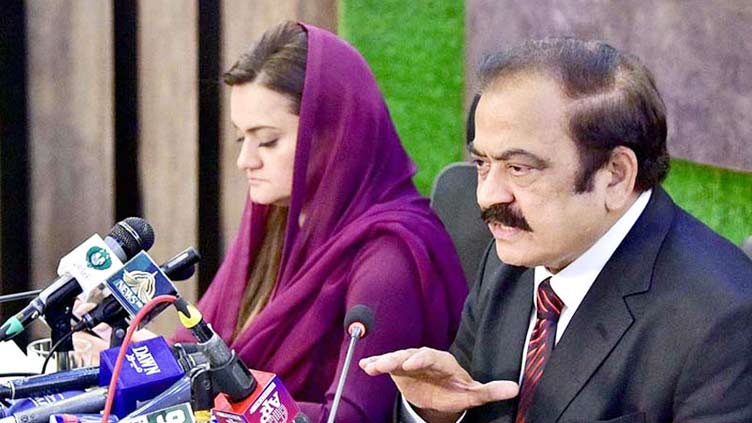 What would Pervaiz Elahi do if five MPs didn't show up on July 22: Rana Sanaullah

LAHORE (Dunya News) – Minister for Interior Rana Sanaullah while admitting on Monday said that the candidates nominated by the Pakistan Muslim League-Nawaz (PML-N) in the by-election had the burden of performance of the previous government due to which the candidates could not get full support even from the party voters and the people of PML-N did not defend them but they will choose better candidates in the next election.

Addressing a press conference in Lahore flanked by Minister for Information and Broadcasting Marriyum Aurangzeb on Monday, Rana Sanaullah while lashing out at former prime minister and Pakistan Tehreek-e-Insaf (PTI) chairman Imran Khan said that a mentally sick man is crying for rigging despite winning the election.

The minister also accused the former PM of rigging in election held in his tenure and said that the election staff was kidnapped when Imran Khan was in power, adding that now he is targeting the Chief Election Commissioner (CEC). The former PTI government set new records of election rigging during its tenure, he said.

He said that the PML-N strongly condemns this campaign, adding that you [PTI chairman] cannot get your point by bullying and blackmailing institutions.

“The CEC and all his members have the confidence and support of the entire nation,” he said adding that they were still expressing confidence in the ECP in spite of losing the by-election.

Further launching the diatribe against Imran Khan, he said that the PTI chairman is using such language as the judgment of the foreign funding case was reserved by the commission.

The Interior Minister went on to say that the former PM is levelling baseless allegations of election rigging despite being clear victory in yesterday  by-elections in Punjab and expressed confidence that the PML-N coalition government ensured free, fair and transparent by-elections in the province.

Rana Sanaullah Khan said that allied parties will jointly decide about holding next general elections which will be free, fair and transparent like yesterday s by-elections.

Regarding the number game in Punjab, the minister said that currently PTI has 188 votes while the PML-N had 180 votes, and asked what Pervaiz Elahi would do if five MPs didn’t show up on the day of vote (July 22).