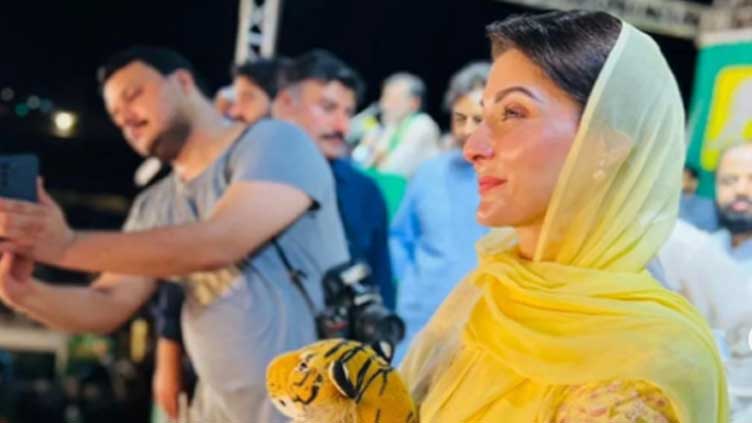 Addressing a rally in Layyah on Wednesday ahead of July 17 by-elections in Punjab, she said that her party will defeat incompetence, inflation and corruption and the PML-N has already won. On July 17, there will be a competition with Punjab s enemy Imran Khan and “Fitna Khan” is another name of anarchy.

She also claimed that the petrol and diesel prices will come down in the next 24 to 48 hours.

The PML-N vice president further said that her pary will be contesting on July 17 against inflation, corruption, incompetence and unemployment brought by the previous rulers. “Imran Khan is the biggest plan of destruction of Punjab, while Nawaz Sharif started projects for the prosperity of the country.

“The lion’s fight is with corruption, incompetence and unemployment,” she said. “July 17 is the main battle with Punjab’s enemy Imran Khan.”

On Tuesday addressing the PML-N election rally in Athara Hazari, Pakistan Muslim League-Nawaz (PML-N) vice president Maryam Nawaz said on Tuesday that Prime Minister Shehbaz Sharif will announce to reduce petrol and diesel prices in next two days. She said that the people of Jhang had won her heart by showering their love.

“Everyone knows why Shehbaz Sharif had to take difficult decisions,” she said and added the prices had to be increased due to agreement with the International Monetary Fund (IMF).

The PML-N vice president claimed that difficult decisions have been made and now good news will come every day, whereas, today, Shehbaz Sharif summoned a summary for reduction in petrol prices.

Earlier, addresing a rally at Chiniot Moor, Maryam Nawaz said that Prime Minister Shehbaz Sharif said that if the people want inflation to decrease then they should vote for PML-N.

PML-N’s competition is not with Imran Khan but with inflation and incompetence,” she said while making a case for the people of Jhang to vote for her party in the July 17 by-polls. She asked the people to make a promise to her that they will throw out the people against Punjab’s development.

The PML-N vice president said that today the whole Jhang has come out in love with Nawaz Sharif. We have come to carry out development work including building schools and colleges in the country and to reduce the prices of potatoes and onions.