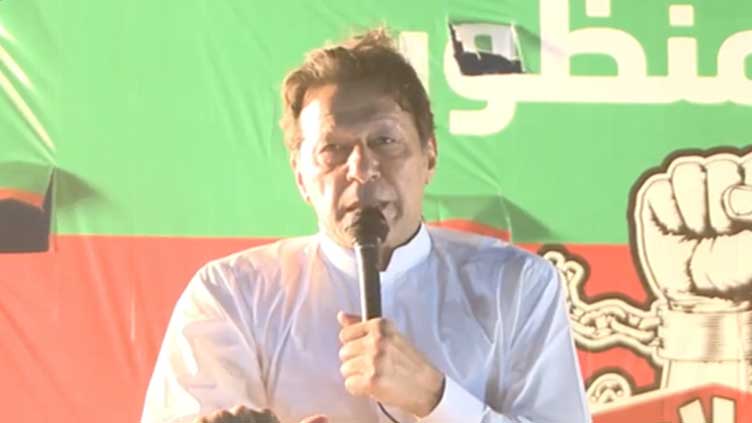 Addressing a rally in Jhang ahead of July 17 Punjab by-elections campaign, Imran Khan said our country could become a great country if we stand with truth and justice, adding that turncoats are the people who sell people’s votes for money and they go against the constitution of Pakistan and betray the country.

“The July 17 by-elections will decide the future of the country and we have to save the country from American slavery by winning the election,” Imran said.

"Our competition is with Sharif family, turncoats and Election commission,” PTI chairman said.

Criticizing the Chief Election Commissioner, the former PM said the PTI government tried to end the rigging by introducing EVM but bigwigs and CEC opposed the EVM due to fear of transparent elections, adding that two families are ruling Pakistan for 35 years but on Sunday we will defeat them and end their rule.

On Tuesday, while addressing an election rally of Pakistan Tehreek-e-Insaf (PTI) at PP-282 in Layyah, the former PM had challanaged the rulers to reduce the prices of petroleum products to Rs150 per liter.

Imran Khan said that the country was making progress when our government was overthrown because the US needed the rulers who obeys their orders.

“According to the Economic Survey, the highest growth has been witnessed in the last two years,” he said and added during the PTI government’s tenure exports increased and country received record remittances, whereas, the textile industry witnessed record production. We made laws and the farmers received money from the sugar mafia.

Earlier addressing a rally in Darya Khan area of Bhakkar, the former prime minister said on Tuesday while launching a tirade against political opponents said that no one will ever accept these thieves and American slaves.

He said, “We do not bow before anyone except almighty Allah and we only seek help from the Almighty.” Imran Khan said that he has been doing jihad against these goons, adding that the government of thieves has been imposed on us but we will never accept American slaves and thieves.

“I will never accept them even if I lose my life,” Imran Khan said and added he took to the streets to wage jihad against these thieves.

The former PM asked the youth to defeat the turncoats in the by-elections with door-to-door campaign.

Calling out Maryam Nawaz, Imran Khan said that the “Princess of lies” is running campaign of thieves. She [Maryam Nawaz] used to say eight years ago that she neither has properties in London nor in Pakistan but Panama Papers revealed she has four palaces.