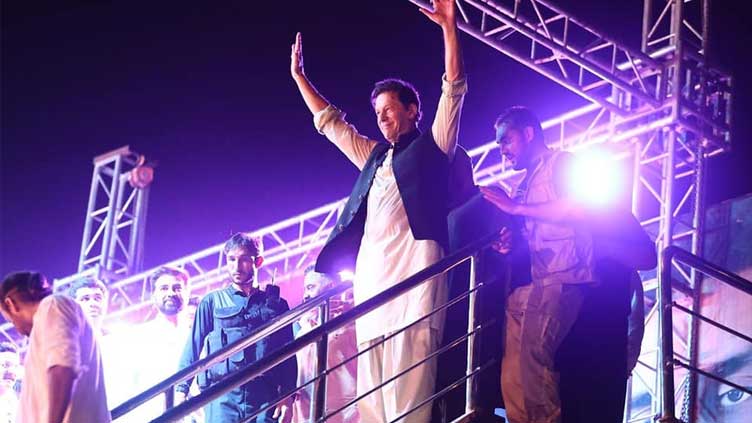 Addressing a rally in Alipur Tehsil of Muzaffargarh on Monday, he said that he was writing everything and the ones who were trying to fix things for the thieves to win upcoming by-elections, will be held accountable.

The former PM thanked the people of the constituency for warm welcome and said that the United States has made a robber as the prime minister of the country. He also urged the masses to convey the message to everyone that this is not just an election but a battle for the real independence of Pakistan.

“Pakistan’s biggest ‘dacoits’ have been imposed on us through a conspiracy by the US,” he said.

Imran Khan further said that the country’s future would be in the hands of slaves of the US if these thieves and turncoats win this election, adding that the by-election should be contested as a jihad.

Turning guns towards Hamza Shahbaz, the PTI chairman said that he [Hamza] has been made Chief Minister of Punjab who after assuming charge increased price of chicken, adding that these thieves play in cahoot with the umpires as they never get anything through honesty.

Earlier, addressing a rally in Lodhran in connection with the July 17 by-elections, Imran Khan lashed out over urban flooding in Sindh said that the Pakistan Peoples’ Party (PPP) has failed to address rain-related issues even in Karachi during it 15 years of rule in the province.

He said that Karachi is Pakistan’s economic hub and for the past 14 years it is being ruled by a dacoit who has destroyed the city.

Giving example of former Punjab CM, Imran Khan said that Usman Buzdar built underground water tanks in Lahore to preserve rain water but the rulers in Sindh never thought of doing anything for the rain water in Karachi. “Sindh cannot progress until Asif Zardari is occupying the province,” he added.

The former PM said that Sindh’s money is plundered and sent to Dubai. “Cases against former president Asif Ali Zardari and Sindh Chief Minister Murad Ali Shah were ready, but an “unknown power” prevented their prosecution,” Imran Khan said and added those who had the power did not consider corruption a bad thing.

Khan went on to say that during his tenure, he had prepared cases against Zardari, members of his family and that of Sindh CM Murad Ali Shah but an unidentified ‘power’ prevented them from being punished. “I tried everything to prosecute them, but whatever that power was did not let me,” he said, adding that he will disclose more details about it at a later time. “Those who had power, they did not think their (Zardari’s) theft was bad enough,” he said.

Mentioning the names of former prime minister and Pakistan Muslim League-Nawaz (PML-N) supremo Nawaz Sharif and family and former president and PPP chairman Asif Ali Zardari, the PTI chairman said that the country has been ruined by the two big plunderers.

Labelling PML-N leader Ahsan Iqbal as the “lying Aristotle”, Imran Khan said that the federal minister had suggested that “corruption doesn’t impede economic development, but instability and policy reversals do.”

Regarding recent incident in which the PML-N leader was heckled at a restaurant, Khan said Iqbal’s hecklers were not misbehaving but merely “telling the truth”.