Will defeat crooks even if CEC sides with them: Imran Khan 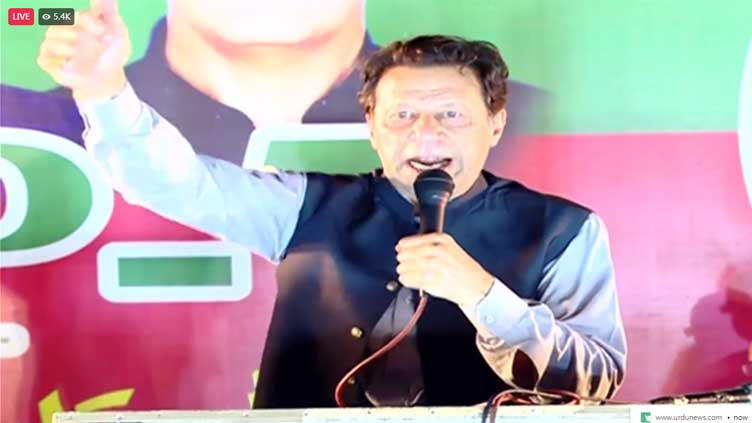 Will defeat crooks even if CEC sides with them: Imran Khan

Will defeat crooks even if CEC sides with them, says Imran Khan

KAHUTA (Dunya News) – Former prime minister and Pakistan Tehreek-e-Insaf (PTI) chairman Imran Khan has said that he was ready to sacrifice their lives for the sake of the country and his party will defeat these thieves in the by-elections even if Chief Election Commissioner work with the crooks to rig by-elections.

Addressing an election rally in PP-7 constituency of PTI candidate Col (r) Shabir Awan in the by-election in Kahuta Tehsil of Rawalpindi, he said that there was a time when turncoats were used to be taken to Murre and Changa Manga, but the turncoats have forgot that the time has changed.

The PTI chairman further said that the US did not like a prime minister who brought an independent foreign policy adding that he wanted a foreign policy that would protect the interests of our people. “Our army and people made more than 80,000 sacrifices in the American war, our soldiers are still being martyred because of the American war.”

Earlier addressing a rally in Khushab, Imran Khan said on Friday that a man sitting in Lahore is on a mission to rig elections for the crooks but Hamza Shahbaz will be sent packing after results of by-polls.

he said that threats were being received from the unknown numbers to pressurize. “I am telling the man sitting in Lahore to do whatever he want but he will only humiliate yourself as people will callout him.”

The PTI chairman said the by-election in Punjab will decide the future of Pakistan either the thieves will rule the Pakistani nation or a ‘Riyasat-e-Madina’ will be established here.

He challenged that PTI will win all seats despite the registration of FIRs, threats, and rigging from the rulers against him and his party leadership.

Previously, speaking with the senior journalists, Imran Khan said that he has no fight with the neutrals and government should detain him if it wants but he is not afraid of arrest.

He said that he has no fight with neutrals and asked why he would fight as this would only weaken country.

“Free and fair elections would be the topic of discussion if talked to neutral,” he said and added he will never enter in an alliance with thieves.

The former PM said that sitting in opposition is way better than sitting with the PPP, adding that there is no backdoor communication through any external and internal force, those who destroyed the country s economy took NRO of Rs 1100 billion.

Imran Khan said that throughout his three and half year tenure of PTI government, they had to face blackmailing from the coalition partners.

Apart from Usman Buzdar, the other candidates did not agree on each other s name as Chief Minister, the PTI chairman said adding that if he had made anyone other than Buzdar Punjab CM, there would be corruption in the province.

The PTI chairman said, “Aleem Khan and Pervez Elahi did not agree on each other s name as Chief Minister.” Khan went on to say that that the country would not emerge from the crisis without clean and transparent elections.