Country has no future with Shehbaz and Hamza in power: Imran Khan 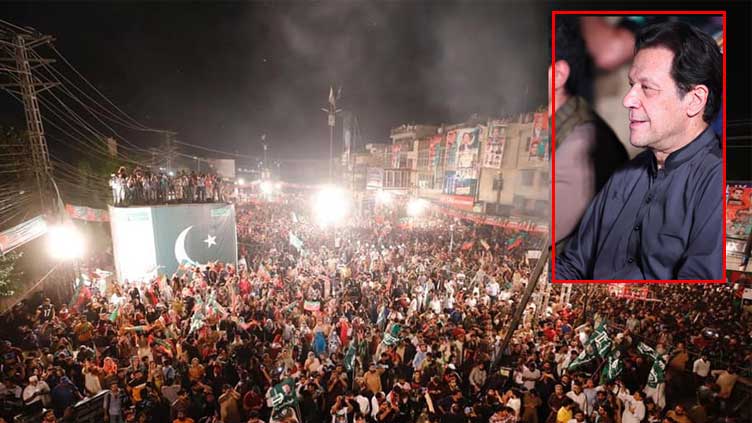 Country has no future with Shehbaz and Hamza in power: Imran Khan

Country has no future with Shehbaz and Hamza in power, says Imran Khan

LAHORE (Dunya News) – Former prime minister and Pakistan Tehreek-e-Insaf (PTI) chairman Imran Khan said on Thursday that the country no future under Shehbaz Sharif and Hamza Shahbaz and they cannot beat us even after cahoot with neutral umpire.

Addressing a rally in Dharampura area of Lahore in connection with the by-election in Punjab, he said that this was his first visit to Dharampura.

“I started politics with a few people 26 years ago and Pakistan is the only country in the world that was built in the name of Islam,” Imran Khan said and added we have to defeat these turncoats by winning this election as this is not a war of power but a war of all of us.

The former prime minister went on to say the country has no future with Shahbaz Sharif and Hamza Shahbaz in power, adding that these people have been robbing the country for the past 30 years and we have to fight these traitors.

The PTI chairman said that he had been trying for two and a half years to make the next elections transparent and our government created EVMs and took steps for transparency in elections, whereas the incumbent rulers by closing the way for transparency of elections abolished the use of EVM machine.

Earlier, Addressing a rally in Sheikhupura, he said that the Pakistan Muslim League-Nawaz (PML-N) was distributing Rs10,000 each to buy votes for the upcoming by-elections in Punjab.

“You [people of Punjab] should take money from them; however, cast your vote in favour of the PTI,” he said. “On the basis of my experience, I know we have already won the election,” he said, congratulating people ahead of the polls.

The former PM said Hamza Shahbaz can do whatever he want but he cannot win election. He said not a single member of his family was in politics and he was the only one who struggled for the country.

The PTI chairman went on to say that the Election Commission of Pakistan (ECP) is in cahoots with these crooks and turncoats and is trying to influence elections in favour of [these] crooks.

Imran Khan while directing his team to come to the field as a team and no one can defeat them, adding that Hamza Shahbaz can do whatever he want but he will not win the by-elections.

Earlier in his informal discussion with senior journalists, the PTI chairman said that the appointment of new army chief was never his issue and his party’s doors are open for talks, adding that he was ready to hold talks with everyone regarding elections. The former PM said that he is afraid from those who have been imposed for ruining the country.

The PTI chairman further said he was not concerned about himself but the country, adding that he was raising his voice for the problems faced by the people today.

Imran Khan went on to say that he can never see the army becoming weak, while appointment of army chief had never been his issue, whereas young men on duty at the borders are like his children and the best solution to every crisis of the economy and the country is elections.