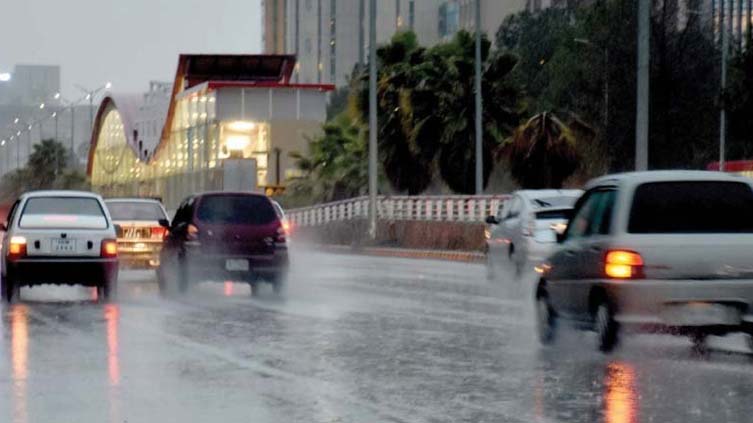 ISLAMABAD (Dunya News) - Heavy rain of monsoon lashed at different parts of the country including the twin cities of Islamabad and Rawalpindi, Sialkot, and others on Tuesday. While low-lying areas inundated due to the heavy rainfall.

Weather in federal capital and Rawalpindi turned the weather pleasant after rainfall with strong wind. While Rain-wind-thundershower in other parts of the country like areas of Sindh, Balochistan, Kashmir, upper Punjab and upper Khyber Pakhtunkhwa made weather pleasant.

As per a spokesperson of met office, the rains will continue during the next twelve to twenty four hours. He said rainfall of 72 mm has been recorded in Islamabad and 86 mm in Rawalpindi.

According to rescue 1122 officials, the water level has reached the dangerous level at Nullah Leh in Rawalpindi. It is flowing at eighteen feet at the place of Katarian and above fourteen feet at Gawalmandi.

Commissioner Rawalpindi Noor ul Amin Mengal also visited the Nullah Leh and reviewed the arrangements made there to deal with any emergency situation.

Rain poured in Murree, Wazirabad, Gujrat, Sialkot and others cities while thundershower is also expected in Karachi.

Earlier, at least seven people were killed and 20 other were wounded in rain-related incidents in different parts of Balochistan including the provincial capital Quetta on Monday.

The torrential rains played havoc provincial capital where six persons, including three women, died as roofs and walls of several houses collapsed in Sariab area of Quetta. Several localities of the provincial capital are also without electricity while roads were submerged under rainwater.