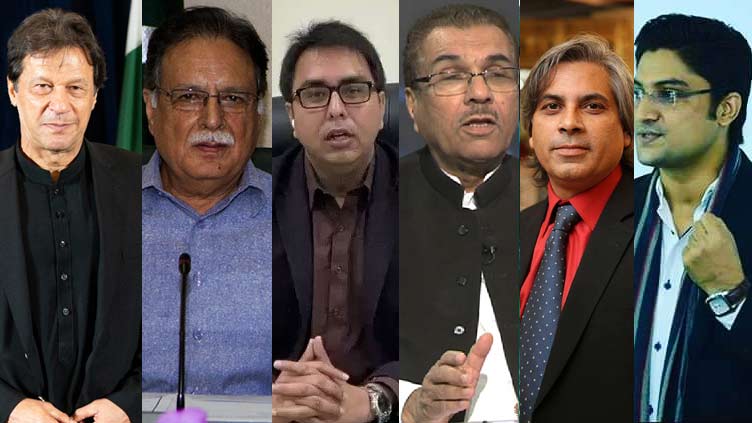 The senior journalist was attacked at Abbot Road in Lahore while his way back home. The attackers manhandled the senior analyst and also took away his belongings including mobile phone.

Amir told Dunya News that his vehicle was blocked and nearly six people tortured him and his driver. The attackers reportedly were wearing face masks.

Dr. Shahbaz Gill wrote on the social networking site Twitter that the attack on Ayaz Amir has been reported as violence and snatching of his mobile phone. These are the same tactics of traditional fascism.

Senior PML-N leader Pervaiz Rashid wrote that the violence against Ayaz AMir deserved less condemnation because all agencies responsible for the protection of citizens must arrest the perpetrators as soon as possible and bring them to justice.

Former Minister of State for Information and Broadcasting Farrukh Habib wrote that Ayaz Amir, a well-known journalist, analyst and columnist and he strongly condemned the attack on him.

Chaudhry Shujaat Hussain said that Ayaz Amir is a very polite and well-mannered journalist and violence against him is not acceptable.

Chaudhry Pervaiz Elahi said that Punjab government should immediately arrest those who attacked the senior journalist.
Former federal minister Monis Elahi also said that those responsible should be severely punished.

Punjab Home Minister Ataullah Tarar has condemned the attack on Amir and said that no one will be allowed to take the law into their own hands, whereas the perpetrators will be prosecuted and legal action will be taken. He said intolerance has badly affected society.

Former federal minister and PTI leader Fawad Chaudhry also condemned the attack on the senior journalist. “PTI strongly condemn attack on senior journalist Ayaz Amir, since imported government took over attacks on Journalists have become a norm we demand a conclusive probe into the incident dissent must be tolerated,” he wrote.

Senior journalist and Dunya News analyst Mujibur Rahman Shami condemned the violence against Ayaz Amir and said that it was a very shameful act.

He further said that Ayaz Amir is a respected journalist, the Punjab government should take immediate notice of this incident, the attackers should be arrested immediately, and all journalist unions should adopt a joint strategy in this regard.

Dunya Media Group President and Senior Anchor Kamran Khan has said that attack on Ayaz Amir is an attack on freedom of press and they way he was targeted is targeting is reprehensible, adding that the attackers should be arrested as soon as possible.

Dunya News senior analyst Salman Ghani said that attack on Ayaz Amir is a challenge for the elected government and the attack on him is reprehensible, this attack is also a message for us, adding that difference of opinions is the beauty of democracy.

Senior analyst Hassan Askari condemned the attack on Ayaz Amir and said that the attackers should be punished and this is a very unfortunate and reprehensible incident.

He further said freedom of expression is necessary to promote journalism. It is reprehensible to suppress anyone’s voice the government should protect the rights of journalists.

Senior journalist Habib Akram has said that it is not right to atttack  anyone over difference of opinions and the state should strongly respond to these unknown persons.

Senior journalist Irshad Ahmad Arif wrote on Twitter that the attack on analyst Ayaz Amir, snatching of mobile phone is shameful, adding that this incident is a serious challenge for the provincial and federal government. The culprits should be arrested soon, he said.

Senior journalist and analyst Mazhar Abbas also condemned the attack and said that political differences can be made with Ayaz Amir but the attack was a very serious matter, it is a challenge for the administration of Punjab.

He further said that such incidents against journalists are constantly happening, adding that attackers should be arrested immediately, this is a very sad and reprehensible incident.

Senior journalist Mubashir Zaidi on Twitter wrote that he strongly condemned the cowardly attack on senior journalist Ayaz Amir and he hopes Prime Minister Shehbaz Sharif will punish the attackers.