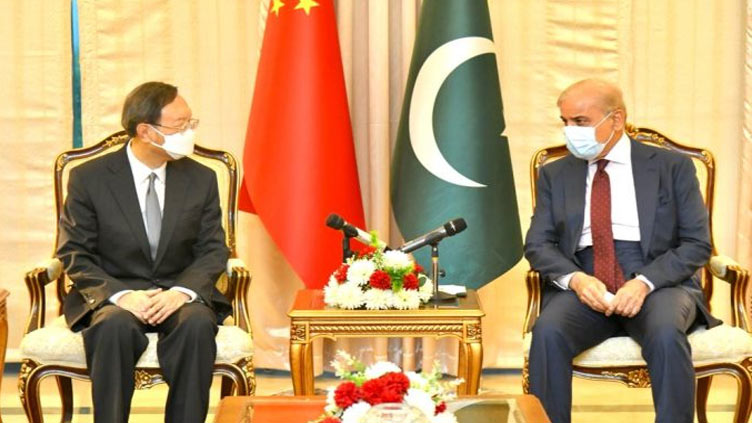 ISLAMABAD (Dunya News) - Prime Minister Muhammad Shehbaz Sharif Wednesday said that China Pakistan Economic Corridor and the growing economic linkages had deepened the roots of the abiding friendship between the peoples of Pakistan and China.

“Atop this unshakeable foundation, the Pakistan-China partnership would continue to play its valuable role as a factor of peace and stability in the region and beyond,” the prime minister said during a meeting with Yang Jiechi, Member of the Politburo of the Communist Party of China (CPC) Central Committee and Director of its Foreign Affairs Commission, who called him.

The prime minister said that Pakistan stood ready to work closely with China for realizing both countries’ shared vision of connectivity, prosperity and public well-being.

The prime minister underscored the significance of Director Yang’s visit for accelerating the implementation of the leaders’ consensus on further enhancing bilateral relations across all domains.

He highlighted that economic cooperation had become a mainstay of the wide-ranging Pakistan-China partnership.

He expressed satisfaction at growing bilateral trade and financial linkages, with China’s unstinting support playing an invaluable role in helping Pakistan offset external shocks to the global economy and demonstrating the continued resilience of Pakistan-China cooperation at a time of heightened uncertainty on the world stage.

The prime minister particularly thanked China for renewal of the RMB 15 billion (US $ 2.3 billion) syndicate facility.

The prime minister also thanked China for its support and assistance to Pakistan’s efforts towards preventing the spread of COVID-19 pandemic by providing millions of vaccine doses as well as protective and medical equipment.

He underlined that as a flagship of the visionary Belt and Road Initiative (BRI), CPEC had transformed Pakistan’s economic base and strengthened capacity for self-development.

He reaffirmed the Government’s resolve to accelerate the pace and complete CPEC projects at the earliest.

The prime minister also underscored the high importance Pakistan attached to the strategic ML-I and other key projects including Karachi Circular Railway (KCR), Babusar Tunnel, and desalinization plant in Karachi.

The prime minister reiterated his strong condemnation of the Karachi terrorist attack and underscored Pakistan’s determination to bring the perpetrators to justice.

He reaffirmed Pakistan’s commitment to enhanced measures for safety, security and protection of the Chinese nationals, projects and institutions in the country.

Recalling the recent visit of tri-services delegation to China led by the Chief of Army Staff, he expressed satisfaction at the expanding defence and security cooperation between Pakistan and China which was contributing to the regional peace and stability.

While emphasizing the need for enhanced people-to-people contacts, he thanked China for facilitating return of Pakistani students to resume their on-campus studies, and expressed hope that the remaining students would be able to return soon.

The prime minister also appreciated Chinese decision for the resumption of PIA flights to China and increasing the frequency of weekly flights.

The prime minister thanked China for its principled stance and steadfast support on the Jammu and Kashmir dispute.

The prime minister and director Yang also exchanged views on the situation in Afghanistan including the humanitarian and economic crises.

The need for international cooperation and unfreezing of assets to avert humanitarian catastrophe and ease the misery of the Afghan people was underscored.

Extending a warm welcome to Director Yang, the prime minister conveyed the most cordial greetings and best wishes for President Xi Jinping and Premier Li Keqiang.

The prime minister noted that director Yang’s visit marked the continuation of high-level exchanges between Pakistan and China, which were the hallmark of the time-tested all-weather strategic cooperative partnership between the two countries.

He also recalled his extensive conversation with Premier Li Keqiang in May 2022, during which both leaders had reviewed the entire spectrum of bilateral relations and exchanged views on the regional and international situation.

At the head of a high-level delegation, Director Yang is paying a visit to Pakistan on June 29 and 30. On arrival in Islamabad, Yang was received by Syed Tariq Fatemi and Mr. Zafaruddin Mahmood, Special Assistants to the Prime Minister, and Ambassador Mumtaz Zahra Baloch, Additional Secretary, and other officials of the Ministry of Foreign Affairs.

Following the meeting, the Prime Minister hosted a banquet in honour of Director Yang and his accompanying delegation.

During the visit, the two sides concluded following Protocols/MoUs:

MoU on terms of reference/scope of works of G2G joint technical working group for realignment of Karakoram Highway from Thakot to Raikot, protocol on the sanitary and phytosanitary requirements for Rhodes grass exported from Pakistan to China, protocol on quarantine and health requirements for buffalo embryos to be exported from Pakistan to China and acceptance letter of 3000 sets of solar home system.

The Chinese side announced the roll-over of $2 billion SAFE deposits. It was also conveyed that China would export 200,000 MT of urea fertilizer to Pakistan.

Reiterating cordial invitation to President Xi Jinping, the prime minister said the people of Pakistan were looking forward to welcoming President Xi on his next state visit to Pakistan at the earliest.

The prime minister expressed his gratitude to the role and contributions of Yang Jiechi which helped in strengthening of the friendship between the two countries and supporting the cause of Pakistan.

He recollected that during 2015, Yang was an important member of President Xi’s delegation and during the visit they signed agreements that started CPEC.

He said that Yang Jiechi was a dear and sincere friend of Pakistan and it was his foresight and vision that always supported Pakistan’s cause and brought the two countries closer.

During his visit to Beijing, the prime minister said, Yang always supported Pakistan for which he thanked him on behalf of the government and the people of Pakistan.

Yang Jiechi reciprocated the same sentiments and expressed the confidence that under the dynamic leadership of Prime Minister Sharif, Pakistan would make social and economic strides.