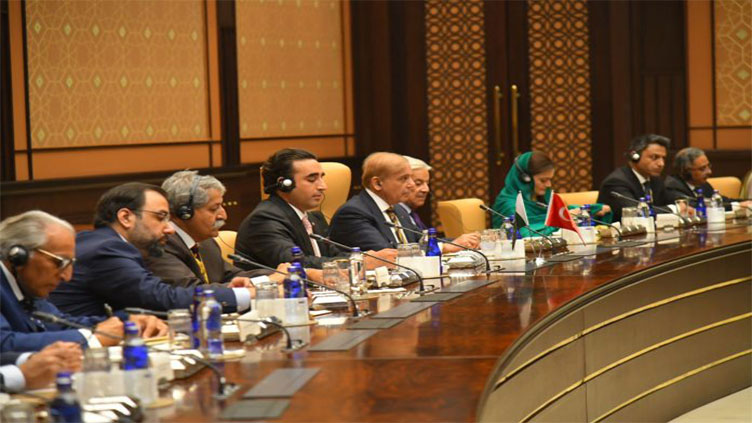 The prime minister held a one-on-one meeting with President of Turkey RecepTayyip Erdogan.

ANKARA (Dunya News) - Prime Minister Muhammad Shehbaz Sharif Wednesday underscored the importance he attached to building a robust economic partnership as a central component of the strategic relationship between Pakistan and Turkey.

The prime minister held a one-on-one meeting with President of Turkey RecepTayyip Erdogan, which was followed by delegation-level talks between the two sides.

During the extensive talks, the prime minister noted that the two countries were marking the 75th anniversary of establishment of diplomatic relations this year. He said the strength of bilateral relations was rooted in centuries-old bonds of love and affection between the two peoples and a common linguistic, cultural and religious heritage.

The prime minister recalled that the two nations had always stood by each other in times of need and that the fraternal ties had been nurtured by each successive generation.

He underlined that the Pakistan-Turkey relationship remained unique and unparalleled in inter-state relations marked by exceptional trust, understanding and mutual support.

Both leaders exchanged views on strengthening of bilateral cooperation in various fields, including trade and investment, and defence.

The two leaders agreed to hold the 7th Session of the HLSCC in Pakistan in September to further carry forward this process.

Earlier, the prime minister was received by President RecepTayyip Erdogan at the Presidential Complex .

The prime minister noted that he was looking forward to welcoming a trade delegation from Turkey in June this year.

He invited the Turkish side to invest in Pakistan, particularly in the fields of hydel power and renewable energy.

The prime minister stated that he would ensure that the Turkish companies were facilitated in their current and future investment projects.

Thanking Turkey for its consistent and principled support on the Jammu and Kashmir dispute, the prime minister noted that President Erdogan s stance on the issue was a source of strength for the Kashmiris and the people of Pakistan.

He thanked the leadership and people of Turkey for their steadfast support for the just cause.

He also appreciated Turkey s contribution towards peace and security in the region and beyond, and expressed Pakistan s support and solidarity with Turkey on issues of core interest.

Both leaders agreed to remain in close contact with a view to taking Pakistan-Turkey relations to new heights.

On Afghanistan, the prime minister appreciated Turkey s humanitarian assistance and constructive engagement, adding that Pakistan, as an immediate neighbour, would continue to stand with the Afghan people and help them in meeting the existing challenges particularly the humanitarian situation and economic fragility.

Both sides agreed to continue coordinating with each other for advancing the shared objectives of a peaceful, stable and prosperous Afghanistan.

The prime minister lauded President Erdogan s efforts to facilitate talks between Russia and Ukraine for a diplomatic solution, and stressed the importance that Pakistan attached to the resolution of conflict in Ukraine through dialogue and diplomacy at the earliest possible.

The two leaders also discussed challenges to food security in the backdrop of Ukraine crisis and agreed to closely coordinate mitigating measures.

On the occasion, a joint logo marking the 75th anniversary of establishment of diplomatic relations was launched.

The two leaders agreed that this milestone would be celebrated by the two countries in a befitting manner.

The prime minister thanked President Erdogan for the warm welcome and gracious hospitality accorded to his delegation.

Extending a cordial invitation to President Erdogan, the prime minister said the people of Pakistan were looking forward to accord him a warm welcome.

Upon arrival at the Presidential Complex, the prime minister was welcomed at an impressive ceremony with a guard of honour. National anthems of both countries were played. The two leaders were introduced to their respective delegations.