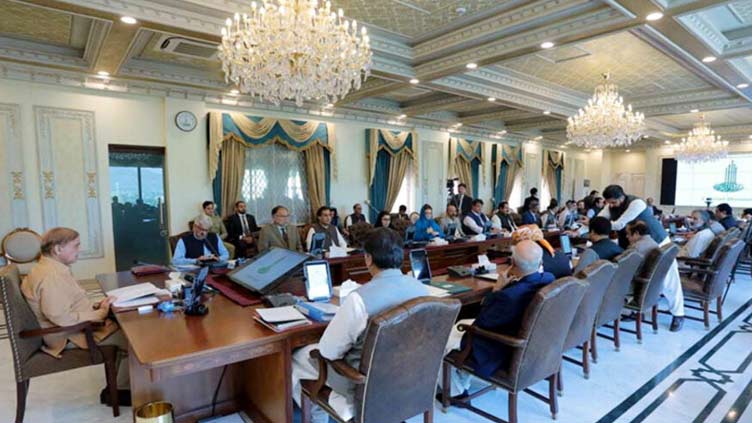 ISLAMABAD (Dunya News) – Following the confession of former prime minister and Pakistan Tehreek-e-Insaf (PTI) chairman Imran Khan that participants of the long march were carrying weapons and statement of Khyber Pakhtunkhwa Chief Minister, the federal cabinet has constituted a committee.

The federal cabinet meeting was held under the chairmanship of Prime Minister Shehbaz Sharif. The meeting discussed in details PTI’s May 25 long march and appreciated the masses for rejecting the long march.

The five-member committee including Rana Sanaullah and Adviser on Kashmir Affairs and Gilgit Baltistan Qamar Zaman Kaira will chalk out a future plan of action to deal with such anti-state activities.

PM Sharif mentioned that he had directed the Interior Ministry and the law enforcement agencies not to carry any weapon at the venue of the long march.

The cabinet felicitated the nation on rejecting Imran Khan’s long march of May 25 and lauded the law enforcement agencies on performing their duties efficiently.

The meeting took strong notice of Imran Khan’s call for a bloody march on May 25 along with the people carrying weapons.

It was highlighted that PTI utilized the resources of the Khyber Pukhtunkhwa government by gathering armed groups in the KP House a day ahead of the long march. Also, the Chief Minister of Gilgit Baltistan attacked the police personnel.

The cabinet expressed grave concern over the statement of Chief Minister KP Mahmood Khan who had announced to attack the State and the federal capital with full force.

On Monday, In his interview with a private television channel, the former PM admitted that the participants of the long march were carrying weapons with them.

He said that the people participating in the long march were ready and they were carrying pistols.

"There was already hatred among the people due to raids carried out by the Punjab Police on PTI lawmakers houses a day before the march," said Khan, adding that "he was 100% sure that the situation would lead to chaos."

“The decision to continue with the march would have led to hatred against the police and the army and would have created further divisions in the country.”

The PTI chairman said, "We want to file a petition that whether the peaceful protest is their right or not. It will be the test of the Supreme Court whether the apex court removes reservations or not."

He said that the PTI would form two different strategies for the long march after the SC ruling. "We had started receiving the videos and the situation at D Chowk was not normal. Fearing bloodshed, I decided not to move ahead. However, we will come with full preparation this time," he maintained.

Imran Khan said that the Chinese investors are not dealt with properly when they visit Pakistan while the Chinese have several other countries to make their investment.