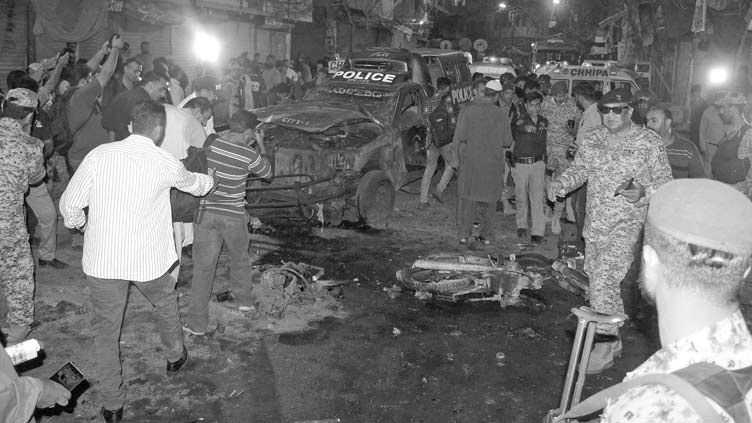 KARACHI (Dunya News) - A blast has been reported in Kagzi Bazaar near Boltan market area of Karachi.

According to police, the nature of the blast is being assessed. Several people have been injured in the blast including three police officials and were taken to the hospital. While one casualty of a woman has also been reported in the tragic incident.

The blast also damaged several motorcycles on the spot.

The Security personnel have cordoned off the blast site and launched a search operation. Rescue teams have also reached the spot. A bomb disposal squad has also been called on the site of the incident.

Prime Minister Shehbaz Sharif condemned the blast near Bolton Market and expressed sympathy to the injured including three policemen and their families and directed immediate arrest of the culprits.

He further assured the Sindh government of full support from the federation and said that all the provinces should improve the security arrangements to ensure the law and order situation and the lives and property of the people.

Meanwhile, Sindh Chief Minister Syed Murad Ali Shah took notice of the blast and called the IG police demanding an immediate detailed report and also got an emergency declared at the Civil Hospital.

Provincial Information Minister Sharjeel Inam Memon has also strongly condemned the incident and said that according to preliminary information, a police mobile has been targeted.

He said that it was a tragic incident which deserves less condemnation, adding that police and district administration had intensified relief operations and ordered emergency in hospitals.

Sharjeel Memon said that investigators and security agencies were examining the nature of the blast and the final details could be revealed after the report was received. The provincial minister said that peace in Karachi was not being digested by the enemies and such moves would not dampen the spirits of the government and the nation.

SP City Ali Mardan said that the target of the blast was a police mobile. ASI police has also been injured in blast, he added.

According to SP City Mardan, possibly there was something in the motorcycle. He stated that we are looking into it. It is too early to say anything right now.

He also said that the Bomb Disposal Squad could check further.

Administrator KMC Sindh government spokesman Barrister Murtaza Wahab condemned the blast in Karachi and said that we will provide the best medical care to the injured. An emergency has been declared at the Civil Hospital, he said.

Providing details on the incident he added that the condition of four patients is critical, while three injured are out of danger.

Karachi has been a target of terrorism in recent times.

The first blast in recent days took place inside Karachi University on April 26, in which four people were killed including three Chinese nationals.

This was followed by an improvised explosive device (IED) blast in Saddar area of Karachi on May 12. One person was killed and several others were injured.