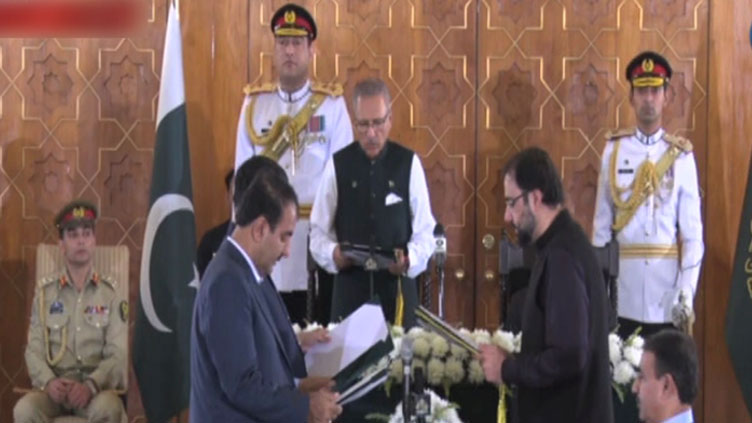 On oath, the cabinet members made its solemn pledge “to bear true faith and allegiance to Pakistan, discharge its duties honestly to the best of ability and faithfully in accordance with the Constitution of the Islamic Republic of Pakistan and the law”.

“I will strive to preserve the Islamic Ideology which is the basis for the creation of Pakistan. That I will not allow my personal interest to influence my official conduct or my official decisions,” said the new ministers while chorus-reading the text of the official oath.

Earlier, Chairman Senate Sadiq Sanjrani had sworn-in the 33- Members of federal cabinet were issued their respective portfolios by the joint decision of the coalition parties under the Prime Minister-ship of Shehbaz Sharif.

Pakistan Muslim League-Nawaz (PML-N) leaders Ahsan Iqbal and Rana Sanaullah were given the ministries of Planning and Development and Interior Ministry respectively meanwhile Azam Nazir Tarar and Marriyum Aurangzeb were given ministry of law and justice and Information Ministery respectively.

Shahzain Bugti is given the portfolio of narcotics control and the Federal Minister Mufti Abdul Shakoor takes charge of Ministry of Religious Affairs while Muttahida Qaumi Movement-Pakistan (MQM-P) leader Amin-ul-Haque was given the charge of Information technology and telecommunication.