NSC statement did not mention the word 'conspiracy': DG ISPR 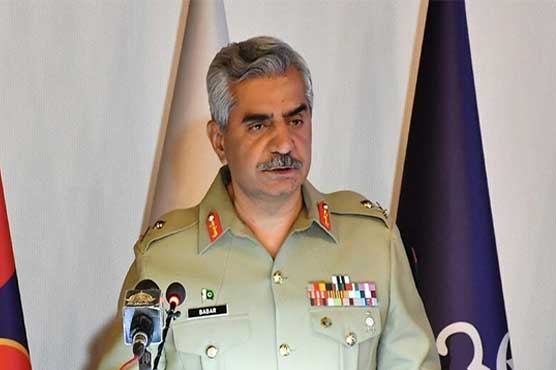 NSC statement did not mention the word 'conspiracy': DG ISPR

The DG ISPR said this when a journalist asked the army leadership’s view on Imran Khan’s claim of a foreign conspiracy to topple his government and whether the NSC had backed such a claim.

"As far as military response about the NSC meeting is concerned, that stance, in that meeting was fully given, and then a communique was issued but I cannot share the points discussed in the meeting because that is confidential,” Maj Gen Babar Iftikhar said.

“If you look at the communique that was issued after NSC meeting, all the words were clearly mentioned.”

Gen Iftikhar said the minutes of the NSC meeting can be declassified if the government decides.

At the beginning of the press conference, DG ISPR Maj Gen Babar Iftikhar reacted to the recent anti-army propaganda and said that baseless character assassination will not be tolerated in any case.

The DG ISPR said that the formation commanders expressed confidence in the steps taken for the country’s security, especially on account of international security and the Pakistan Army’s role in upholding the rule of law.

"All of them agreed that democracy, strengthening of institutions, supremacy of law and all the institutions working within the constitutional limits is in better interest of the country," DG ISPR said.

The DG ISPR said constructive criticism is justified but becoming part of conspiracies on the basis of rumors and baseless character assassination will not be tolerated in any case.

“An organized malicious propaganda campaign is being run against Pak Army and its leadership. Even, deep fake technology is being used to generate fake audio messages of different retired military officers to create rift between army and public,” Maj Gen Babar Iftikhar said. “Such acts are totally illegal, unethical and against the national interest.”

The DG ISPR requested people of Pakistan and political parties not to drag army into politics. “We want to come out of this. Keep us out of this discourse,” he added.

He said the Army Chief had categorically assured the parliamentary leaders that there would be no political role of the army.

To a question, he said former prime minister Imran Khan had taken the Army on board before his visit to Russia.

He also lambasted the BBC for perpetrating a concocted and frivolous news story on the ouster of former prime minister as it was "unethical".

He said Army Chief General Qamar Javed Bajwa was going to retire on November 29, 2022 and he would neither demand nor accept any extension in his service whatever the circumstances might be.

He underscored that the data pertaining to the propaganda over the social media against the Army and its leadership, was compiled by the government departments and there were foreign linkages to it.

"Unverified information sharing promotes propaganda and fake news, and our religion preaches that it is enough to declare someone a liar when one shares the fake news without confirmation," he added.

The Chief of Army Staff, he said, had repeatedly said that Pakistan s future rested in democracy and the Army had nothing to do with politics.

To a query, the DG ISPR responded that the Army was not in the position to give an NRO (National Reconciliation Ordinance) to any party, whereas the past events occurred as part of the departmental procedure.

He lamented that the Army was the major target of disinformation campaign and all stakeholders should sit together to enact laws for curbing disinformation propaganda campaigns.

He mentioned that the youth were not well informed on the operational and strategic measures taken by the quarters concerned. "We need to take proper measures to insulate our society and institutions at the government and individual levels from disinformation campaign and propaganda", he added.