Shehbaz vows not to indulge in politics of 'revenge' 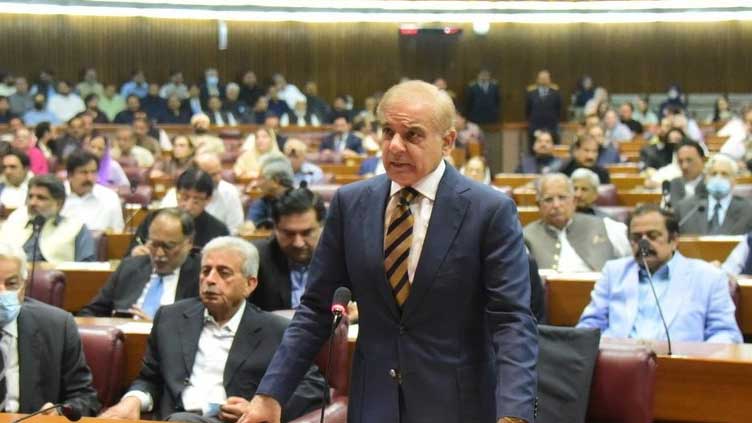 Shehbaz vows not to indulge in politics of 'revenge'

Shehbaz Sharif addressed the National Assembly after approval of no-confidence vote against Khan.

ISLAMABAD (Dunya News) – Taking the floor after the passage of no confidence resolution against Imran Khan, President PML-N Shehbaz Sharif expressed the commitment to take forward the country and make it a great nation whilst forgetting bitterness of the past.

"I don’t want to go back to bitterness of the past. We want to forget them and move forward. We will not take revenge or do injustice; we will not send people to jail for no reason, law and justice will take its course," Shehbaz said.

"Neither I, nor Bilawal, nor will Maulana Fazlur Rehman interfere. Law will be upheld and we will respect the judiciary," Shehbaz said.

Shehbaz Sharif said we want to health the woes and wounds of the nation. We will not take revenge from anybody. He said there will be no injustice or excesses and innocent people will not be sent behind the bars. He however, said that the law will take its course.

The PML-N President said we respect the judiciary. He vowed to run the affairs of the country in consultations and taking along the institutions.

Shehbaz Sharif also thanked other allied parties for demonstrating unprecedented unity, solidarity and discipline. He was confident that this unity will again build Pakistan.

Bilawal Bhyutto Zardari said he has learned a lot during the last four years of political struggle. He said he would like to give a message to the youth that nothing is impossible.

JUI-F leader Maulana Asad Mahmood congratulated all the democratic forces that carried out struggle for supremacy of the constitution. He said they have achieved their objective through a democratic struggle.

He expressed commitment that the allied parties will continue to have unity in days ahead as well and make Pakistan an Islamic welfare state.

In his speech, MQM leader Khalid Maqbool Siddiqui said this change should not be confined to merely change of faces, but it should bring about real change in the lives of people.

He said democracy is the only way to progress.

Speaking in the session, Balochistan Awami Party leader Khalid Magsi said Shehbaz Sharif is a hard-working person and he would hopefully perform better.

He said we will not take revenge from anyone, but serve the nation in the real sense.

Balochistan Awami Party-Mengal Chief Sardar Akhtar Mengal said the credit for today’s success goes to all the workers of the allied parties. He emphasized on ensuring supremacy of the constitution.

MNA Mohsin Dawar said terrorism is one of the biggest challenges, which needs to be addressed through a clear strategy. He said there should be zero tolerance against militancy.

In his remarks, ANP leader Amir Haider Hoti said the allied parties not only made the no-confidence motion a success but also strengthened democracy.

PTI leader Ali Muhammad Khan said Imran Khan faced defeat but not accepted slavery. He said Imran Khan was targeted because he stood for independent foreign policy. He expressed hope that Imran Khan would again become prime minister with the support of people.

work could be carried out there at a fast pace, particularly in the areas where CPEC is being implemented.

MNA Ali Nawaz Shah said we all together have to work for progress and prosperity of the country.

The Chair adjourned the House to meet again on Monday at 11:00 am.