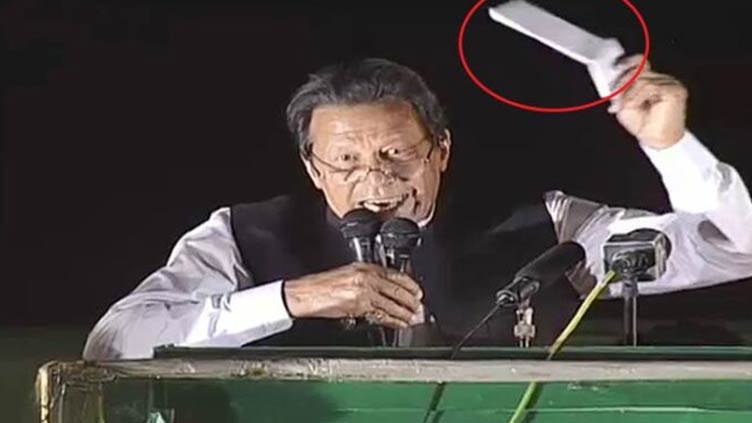 ISLAMABAD (Dunya News) – The federal cabinet approved the threatening letter to be shared with the chairman senate, chief justice.

A special meeting of the Federal Cabinet was held under the chairmanship of Prime Minister Imran Khan. The meeting was held at the Prime Minister s House in which Pervaiz Khattak, Shireen Maazari, Murad Saeed, Shafqat Mahmood, Shaukat Tareen and others participated.

According to sources, the federal cabinet has approved to share the threatening letter with the Speaker National Assembly, Chairman Senate and Chief Justice of Pakistan.

On Friday, Prime Minister Imran Khan while expressing disappointment over the decision of the Supreme Court warned that he would not accept the imported government.

"We got to know that US diplomats were meeting our people. Then we got to know about the entire plan," he said, adding that he is not at the liberty to publicly release all the details owing to national security concerns.

The Prime Minister said that he was disappointed with the decision of the apex court, adding that he was also jailed during the independence movement of the judiciary.

He said that the Supreme Court would have at least summoned the cipher and had seen it themselves to check whether the government’s claims on conspiracy for regime change was true or not.

PM Imran slammed the opposition for indulging in blatant horse-trading, saying politicians are being bought and sold like sheep. Nowhere else in the world, not even in banana Republics, does this happen so openly.

He said foreign powers want a pliable PM and that s why they are trying to get him out. He has called the political situation an attack on the sovereignty of Pakistan. "We are 220 million people. It is insulting that someone from outside is ordering this to 220 million people," he said.

The premier said, "Our foreign policy should be free and it should be for the people of our country, that is, we should have the better relations with everyone. We should explain to the US that Imran Khan is not against America but we should not be used like a tissue paper.

While calling on the masses to protect the country s sovereignty, PM Imran Khan pointed to India and said that no superpower can dictate terms to it. "None of them has the guts to speak to India like that," he said.

He said he had struggled for his party’s success for 14 years. “The people used to make fun of us, but with the blessings of Allah we rose to this stature.”

He said he had neither any property, nor any bank accounts abroad and had nothing to lose, and his only objective was to raise the dignity and prestige of Pakistan.

He recalled the decision to dissolve the National Assembly last Saturday and said he took the decision so that he could go back to the people who had brought him to the place, and participate in a fresh election, in a perfectly democratic way.

“However, the group of politicians, who got NRO 1 (National Reconciliation Ordinance 1) earlier, now have NRO 2 and their objective is to disband the National Accountability Bureau, stop the corruption cases, as almost all of them [leaders of the PDM alliance] are on bail. But please understand that it is your money that they have looted.”

He said the opposition alliance was against the use of Electronic Voting Machines as “they (opposition do not want free, fair and transparent elections, and deny the voting rights to overseas Pakistanis”.