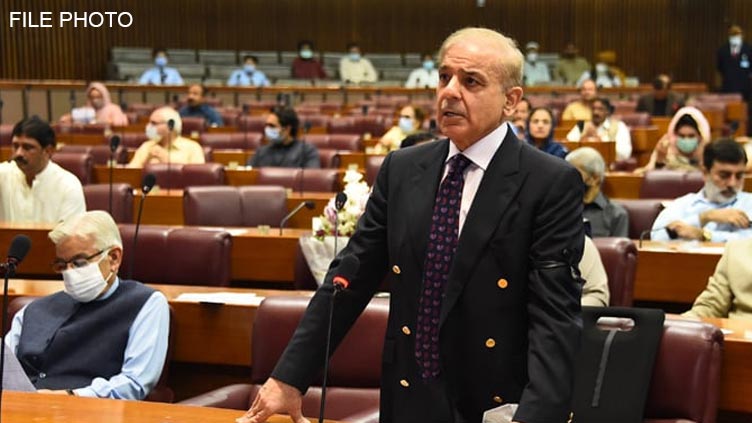 Shehbaz told the speaker to conduct the session as per the order of the Supreme Court.

According to details, at the beginning of Shehbaz’s speech, several of the PTI MNAs started interrupting his speech by chanting slogans.

Shehbaz told the speaker to conduct the session as per the order of the Supreme Court and added that today, the Opposition will oust the "selected" prime minister by adopting a lawful and constitutional procedure.

He also thanked the opposition leadership for struggling against the erroneous ruling, the fruits of which the country was seeing.

Shehbaz told the speaker to let bygones be bygones and to stand for the law and the Constitution. He urged the speaker to play his role and to have his name "written in history in golden words".

"You must cash in on this moment with conviction and with your heart and your mind. Don’t go on the dictation of the selected prime minister," he urged Qaiser, adding that the apex court’s directives were clear.

Responding to Shehbaz’s earnest plea, Qaiser assured the opposition leader that he would conduct proceedings according to the law and the Constitution. "[But] the important thing is that there has been talk of an international conspiracy. This should also be discussed," he said.

"Under the court’s directives, you are bound to take up this agenda item and no other item. That is the intent of the order and you cannot deviate from it," he said, calling on the speaker to hold voting on the motion forthwith.

"The SC’s orders will be followed in true letter and spirit," Qaiser replied, giving the floor to Foreign Minister Shah Mahmood Qureshi.