Sehri tomorrow will be in 'Naya Pakistan' but Iftaari will be in old Pakistan: Bilawal 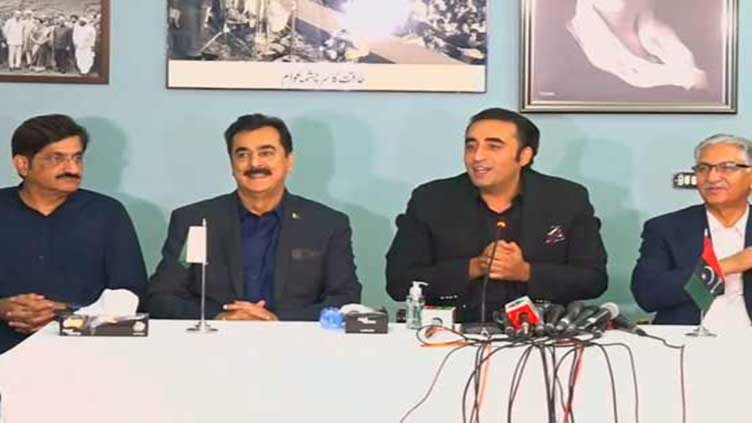 Sehri tomorrow will be in 'Naya Pakistan' but Iftaari will be in old Pakistan: Bilawal

The Pakistani nation knows the PM and his lies will no longer work, says Bilawal.

ISLAMABAD (Dunya News) – The Chairman of Pakistan Peoples Party (PPP) Bilawal Bhutto Zardari while talking the matter of no-confidence motion against Prime Minister Imran Khan said that on Sunday our Sehri will be in the ‘New Pakistan’ but by Iftaar we will enter the ‘Old Pakistan’.

Chairman Pakistan Peoples Party, Bilawal Bhutto Zardari addressing a press conference at Zardari House, Islamabad on Saturday evening felicitated the nation on the arrival of the holy month of Ramadan. He said that our Sehri tomorrow will be in the ‘Naya Pakistan’ but Iftaari will be in the old Pakistan. The devil is banished in Ramadan, tomorrow we are going to banish the devil of Bani Gala.

Chairman Bilawal congratulated every Pakistani, belonging to every province who was troubled with the poverty, price-hike, PTIMF deal, unemployment, this government’s incapability and worried for democracy as well as the freedom of press, on their problems ending from tomorrow.

He said that a journey towards electoral reforms and fair elections would begin from tomorrow. The people would then elect their own representatives. I want to convey to the nation that we have repeatedly asked of the PM to take the honourable exit and accept his defeat. He should have tendered his resignation. Now that the voting is taking place, it should take place in a peaceful manner. It is unfortunate that this defeated man is making efforts to disrupt peace. He will try for there to be violence, if not outside the parliament, then inside it. He will try to undermine a constitutional, democratic and peaceful transition of power by the show, display and use of force. This is a very serious issue. Parliament is our supreme institution. It represents the people of the country. It is unfortunate that no PM in the history of the country has been removed constitutionally. Now that we are driving out a PM democratically, no obstacle should be erected.

Chairman Bilawal Bhutto Zardari said that if such a precedent is set for the Parliament, then it would impact the future of the country. There are other institutions in Islamabad as well, they have their own procedures of appointing their heads such as the Supreme Court. If tomorrow, the democratic process of our institution is hindered, then same efforts can be made for another institution. We cannot allow for this to take place in Pakistan. This is why we are bound by the same constitution. According to the constitution, it is written in the Supreme Court’s own order that no one can stop a member from going to the Parliament. The Supreme Court has stated that no political party should call their workers to the Red Zone. Now, it is on record that the PM has given a call for Jihad and protest today and tomorrow. For a while now, PTI’s tiger force and goons have been given the task to reach Islamabad. Different statements and audios of the defence minister and CM KP have been revealed in this regard.

Chairman PPP called upon the Supreme Court of Pakistan to exercise the powers vested in the Supreme Court of Pakistan to enforce its own judgement. It has the authority to call upon any agency to aid the Supreme Court in implementing its order. Every institution, every Pakistani should fulfil their responsibility. No one should allow this defeated man to toy with democracy and the country’s future. The united opposition has already displayed its majority. Tomorrow is just a formality that should be completed constitutionally. We know how to protect our people.

Responding to a question, Chair PPP said that this man will cease to be the PM of Pakistan. There is no confusion in the law or constitution as far as that is concerned. His cabinet will cease to be the cabinet of Pakistan. If the constitution doesn’t consider him the PM, if the people don’t and if the Supreme Court won’t, then the PM not admitting defeat will make no difference. It is the media’s constitutional and democratic right to show the Pakistani nation what is happening in the House and if efforts of rigging are made. The Supreme Court should ensure that the PTV Parliament and the media be allowed to show what is happening. If we cannot implement the rule of law in the parliament, then how can we do this in the rest of the country? We have the majority and the results are before everyone. Their intentions and statements are before everyone and this is a clear contempt of court. It is very important that the law take its course, the constitution takes its course and we ensure that there is a peaceful transfer of power. I am certain that our judiciary will not allow any undemocratic and unconstitutional step. The PM has made every effort to save himself. Whenever his ministers have interacted with any of my parliamentarian, they were begging for us to take back our no-confidence.

Our answer then was ‘Absolutely Not’ and it is the same now. There are only two ways now, one is to take the honourable exit and the other is to face the no-confidence. This man has been inspired by Donald Trump.

He is trying to frame a big lie. The Pakistani nation knows the PM and his lies will no longer work.

Chair PPP said that the PM seems very worried about his and the first lady’s character assassination. He is perhaps worrying that victimising actions will be taken against him. I will try to convince Shehbaz Sharif and Rana Sanaullah to take no such actions. However, if he is trying to harm the democracy of the country, then I ensure him that he will not be spared. The PM’s going to show, or intends to show or use violence to undermine our constitutional process. We will ensure that the Article 6 is applied. We will win if rigging doesn’t take place. Otherwise, the Supreme Court’s order is there and it will be a contempt of court. It is a win-win situation.

Pakistan should run as according to the rule of law and not the law of the jungle. If our plan had been made before him going to Russia, then how can he call it a foreign policy? It is all a lie. Imran Khan is trying to use our foreign offices to escape. This won’t stand in any court when it can clearly be seen that the same PM who had earlier termed it a gift is now calling it a foreign conspiracy upon losing his majority. It is his naivety to think that Pakistan will tolerate any sort of anarchy.

We hope that the country’s democratic institutions will not let such efforts of Imran succeed. The constitution does not allow for the Speaker to commit rigging. We will not let the Speaker or anyone else commit rigging. The PM cannot issue a notification until he proves his majority. Our effort will be to move towards free and fair elections. I believe that electoral reforms should be our priority and not any victimisation, let’s see whether the united opposition agrees.