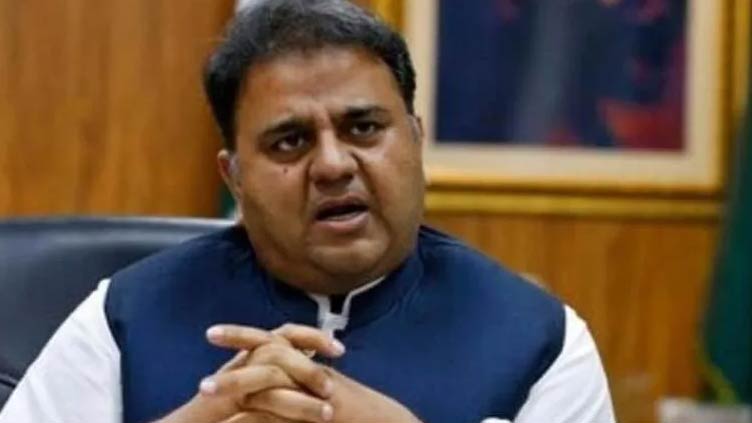 ISLAMABAD (Dunya News) – Minister for Information and Broadcasting Fawad Chaudhry said on Friday that the government has decided to file a plea in the court seeking bail cancellation of PML-N leaders Shehbaz Sharif and Hamza Shahbaz.

Talking to media flanked by along with Energy Minister Hammad Azhar and Special Assistant to Prime Minister on Political Affairs Shahbaz Gill in Islamabad on Friday, he said both Shehbaz Sharif and his son Hamza Shehbaz, who were on bail in the corruption cases, were looking for the slots of prime minister and Punjab chief minister.

“I was just told that the law ministry’s charge is being given to me… I, at once, will ask for filing petitions for the cancellation of bail of both Shehbaz and Hamza,” he added.

The minister said the Pakistan Tehreek-e-Insaf (PTI) leadership had taken strict note of its dissident Members of National Assembly’s (MNAs) meeting with the opposition parties.

The legal team had finalized its action plan regarding the dissident MNAs, he added. It would plead before the apex court that the matter of no-trust motion should be looked into as being a part of an international conspiracy.

It was beyond one’s understanding as to how the conscience of 22 PTI MNAs awakened all of a sudden, he remarked.

The minister said some members of the allied parties of government were invited to attend the special meeting of Federal Cabinet where the content of the “threat letter” was shared, but they refused.

Likewise, he said, Leader of the Opposition Shehbaz Sharif was also asked to attend a meeting so that he, himself, could see the evidences of the foreign plot, but he also refused. He did not come to the meeting as he already knew of the conspiracy.

The minister accused the leaders of main opposition parties of being part of the international conspiracy against the democratically elected government.

Referring to the three PML-N leaders who held a press conference over the prime minister’s address to the nation the other day, he said they had no right to talk about the foreign policy.

One of the PML-N leaders, Khawaja Asif, held “Iqamas” of other countries while being a cabinet member in the Nawaz Sharif-led government, he recalled.

Fawad paid tribute to the people who held protests against the sell-outs. “Those who have taken part in those protest are our heroes,” he added.

Federal Minister for Energy Hammad Azhar, on the occasion, claimed that some foreign powers were trying to install a puppet government in Pakistan to achieve their nefarious designs.

He also highlighted the economic achievements made by the PTI government during last three and a half years, saying the country was moving on the road of progress and development.

The incumbent government had achieved economic growth rate of 5.5%, he added.

Due to the policies of PTI government, the minister said, all the international agencies had upgraded Pakistan’s ranking. “Record loans, taken by the previous regimes, have been paid by our government,” he added.

He also criticized the agreements signed by the PML-N government with the Independent Power Producers and said the PTI government had re-negotiated them for the benefit of the country.

He expressed the hope that Pakistan would exit from the grey list of the Financial Action Task Force (FATF) as it had already met all the conditions. “We have met 32 conditions out of 34,” the minister said.