No-confidence motion against PM will be taken forward: Shehbaz Sharif 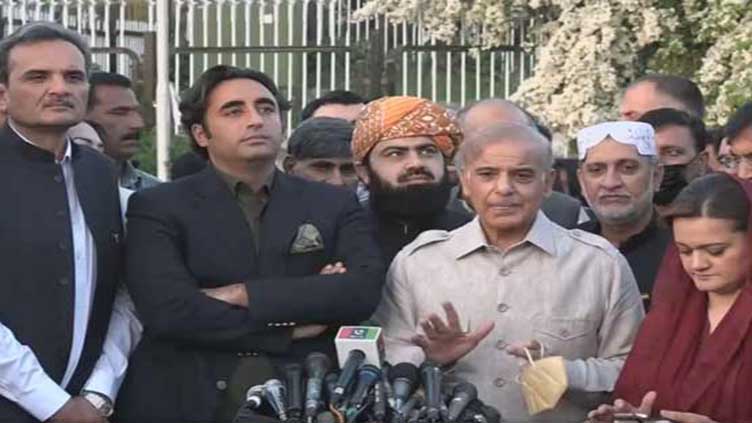 No-confidence motion against PM will be taken forward: Shehbaz Sharif

All the questioning members demanded a vote, says Shehbaz.

ISLAMABAD (Dunya News) – The President of Pakistan Muslim League-Nawaz (PMLN) and the leader of opposition in the National Assembly Shehbaz Sharif on Thursday said that the no-confidence motion against PM Imran Khan will be taken forward.

In a media talk after the parliamentary session, along with opposition leaders including the Chairman of Pakistan Peoples Party Bilawal Bhutto Zardari, the Leader of the Opposition said that the Deputy Speaker again violated the parliamentary tradition in the House today, adding that the no-confidence motion was supposed to be debated today.

The PMLN leader explained that the session was adjourned even after the opposition consistently requested the Speaker to vote.

All the questioning members demanded a vote, he added.

He continued saying that, Bilawal and I also went to the Speaker, adding that even today the law has not been obeyed.

The judiciary is also watching, the whole country is upset, 172 members of united opposition were present in the house, said PMLN leader.

The leader of the opposition in the National Assembly went on criticizing the PM, he exclaimed that those who have been funding you also include Indians and Israeli.

He also mentioned that Former Prime Minister Nawaz Sharif is being falsely accused.

While talking about the letter he stated that this letter is false and fraudulent, adding that evidence should be brought before the nation.

On the occasion, the Chairman of PPP Bilawal Bhutto Zardari said that Imran Khan has no way to escape and It’s too late for NRO now.

Bilawal Bhutto expressed that there is no option left for the PM but to leave and now nothing can save him. He suggested that the PM should resign and adopt the democratic way for his removal from the position.

Bilawal further stated that the opposition presented 175 members in the assembly today. Talking about the importance of democracy he mentioned democracy upholds when all institutions work under their specified limitations.