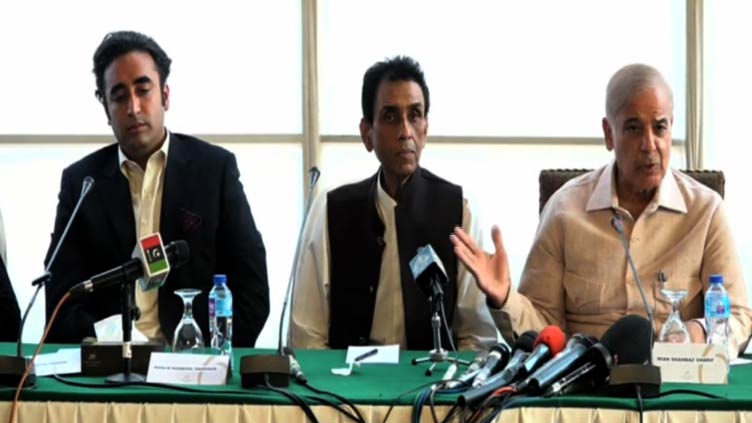 ISLAMABAD (Dunya News) – Muttahida Qaumi Movement-Pakistan (MQM-Pakistan) on Wednesday announced to work with the opposition after splitting from the ruling coalition on the issue of no-confidence motion against Prime Minister Imran Khan.

He said that national leadership is passing through a test, and the MQM has entered into an alliance with the opposition, adding that the MQM is with the opposition for a change and start an era where political differences are not considered as enmity.

Speaking on the occasion, Leader of the Opposition in National Assembly and PML-N president Shehbaz Sharif said that today is an important day in the history of the country and perhaps there has been an occasion in decades when the entire national political leadership is present on one platform in the form of a national Jirga.

Pakistan Peoples’ Party (PPP) Chairman Bilawal Bhutto Zardari said that he is grateful to MQM-Pakistan for splitting from the coalition with the government. He said that this announcement is historic and we have to work together for the development of Karachi, adding that working relationship between the PPP and MQM had nothing to do with the no-confidence motion. “Imran Khan is no longer the Prime Minister, now you can t run so long,” he added.

Bilawal further said that PM Imran has now run out of options and he should step down as he has lost majority in the parliament, adding that the BAP and Jamhori Wattan Party (JWP) are also in the opposition.

The PPP chairman said that the opposition will work together for the development of Pakistan, while the whole country is suffering because of the conspiracy in the form of government.

PPP leadership held consultations with its CEC and while MQM-P consulted the Rabita Committee to discuss the coalition between the parties to vote for Opposition’s no-confidence motion against Prime Minister Imran Khan.

A delegation of joint opposition parties called on MQM-P leadership at the Parliament Lodges during which all matters between the two sides were settled.

Pakistan People’s Party (PPP) chairman, Bilawal Bhutto Zardari in his Twitter massage has congratulated the nation and said that united opposition and MQM have reached an agreement.