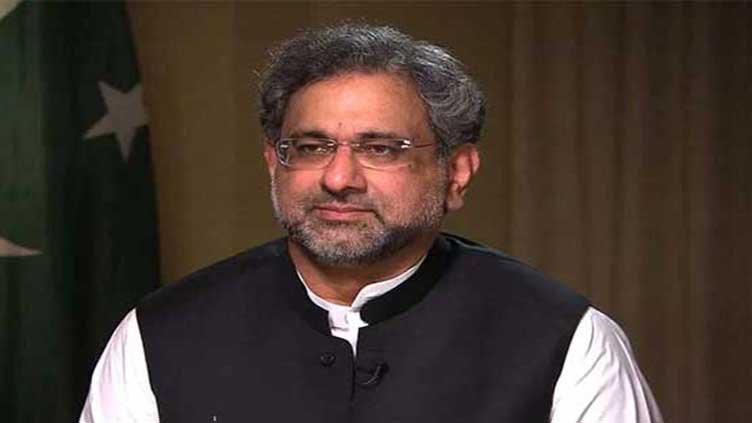 ISLAMABAD (Dunya News) - Pakistan Muslim League-Nawaz (PML-N) Senior Vice President Shahid Khaqan Abbasi has demanded the PTI-government to call an in-camera session of the National Assembly and present the ‘letter’ in the house.

He made the demand while addressing a presser in Islamabad on Sunday.

Shahid Khaqan Abbasi further said that the government must make the ‘letter’ public at once so that truth would come before the nation.

It is pertinent to mention here that Prime Minister Imran Khan while addressing a large public at Parade Ground in Islamabad on Sunday had brandished a “letter” before the crowd and said the international powers with the help of local politicians were hatching a conspiracy against him and this letter contained evidence of a foreign plot.

Mr. Abbasi said that the ambassador of the country, which had hurled threats at Prime Minister of Pakistan Imran Khan, must be expelled as this was not a threat to him but it was a threat to Pakistan.

He maintained that all the political parties would support the prime minister if any country had hurled threats at him.

He lamented that the present government had brought the country to this level when foreign countries were intimidating our prime minister by writing a letter.

He asserted that he had talked to a number of former and current ambassadors in this regard but they said that they had never seen and experienced such practice that a foreign country wrote a threatening letter to another country in this way.

Replying to a question, Abbasi asserted that the Opposition had more than the required number of MNAs to make the no-confidence motion success, adding that no one could dare to deter parliamentarians from coming to the National Assembly on the day of voting on the no-trust motion.

If someone wanted to do so, he was free to do it but he would see its consequences, he warned.