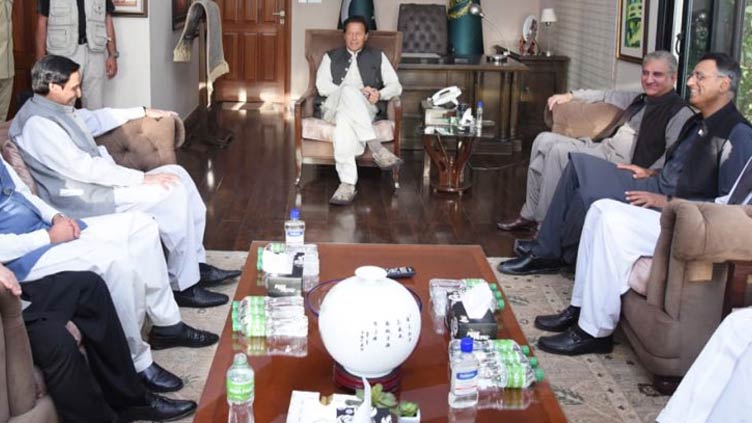 Monis Elahi said PTI govt has nominated Pervez Elahi as next Chief Minister of the province.

Pakistan Muslim League-Q (PML-Q) leader and Federal Minister for Water Resources Chaudhry Monis Elahi has said that the government has nominated Pervez Elahi as next Chief Minister of the province.

“Pervez Elahi has accepted the offer of the post after Usman Buzdar submitted resignation to the party leadership during the meeting,” he said.

According to spokesperson for Chaudhry Pervaiz Elahi, after the approval of the resignation of Chief Minister Usman Buzdar, all the posts including the cabinet of Punjab will be dissolved.

Minister of State for Information and Broadcasting Farrukh Habib wrote on social networking site Twitter that Chaudhry Pervaiz Elahi had a meeting with Prime Minister Imran Khan, in which all matters were settled.

"PM Imran Khan has decided to nominate Chaudhry Pervaiz Elahi as the new Chief Minister of Punjab, he wrote.

The state minister said PML-Q leader and Speaker Punjab Assembly Chaudhry Pervaiz Elahi called on Prime Minister in Islamabad and expressed full confidence of his party in the leadership of Imran Khan as Prime Minister.

The state minister further added that Chief Minister Usman Bazdar had handed over his resignation to the Prime Minister.

Earlier today, in a bid to dethrone Usman Buzdar, the opposition in the Punjab Assembly had submitted a no-confidence motion against Chief Minister (CM) Punjab.

The no-confidence against CM Usman Buzdar had been submitted by a Members of Punjab Assembly (MPA) of Pakistan Muslim League-Nawaz (PML-N).

The opposition had also submitted a requisition to summon the Punjab Assembly session in which the no-trust motion will be tabled.

Earlier, a no-confidence motion against Prime Minister (PM) Imran Khan was submitted by opposition parties on March 8 after the Pakistan Peoples Party’s (PPP) long march in Islamabad. The Opposition is confident that its motion would be carried as many Pakistan Tehreek-e-Insaf (PTI) lawmakers have come out in the open against PM Imran Khan.