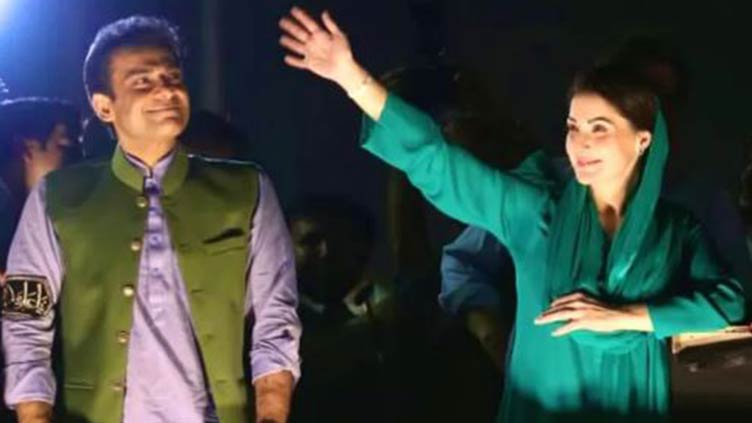 Hamza Shahbaz said, “Imran Khan will have to give an account of his false promises."

LAHORE (Dunya News) – Pakistan Muslim League-Nawaz (PML-N) vice president Maryam Nawaz said on Saturday that the no-confidence motion has been succeeded and they were going Islamabad to say goodbye.

Speaking exclusively to Dunya News reporter Hassan Raza on Saturday, she said that our convoy is being welcomed everywhere and the no-confidence motion has been succeeded.

She further said that this country, people and institutions belong to Nawaz Sharif and the PML-N supremo is good for everyone, adding that the government is holding rallies on state resources.

The opposition leader said that he has heard reports Punjab assembly being dissolved by the government, adding that their legs were shaking. “We have prepared plans for Punjab too and won’t let the government run,” he said.

Hamza Shahbaz said, “Imran Khan will have to give an account of his false promises, adding that the no-confidence motion will succeed and Imran Niazi will be removed from power and presented to the people s court.

Earlier today, what is termed as a decisive campaign to oust Pakistan Tehreek-e-Insaf (PTI) government, Pakistan Muslim League-Nawaz (PML-N) kicked off its “Mehangai March” from Lahore.

Before kicking off the long march, PML-N vice president Maryam Nawaz and Leader of Opposition in Punjab Assembly Hamza Shahbaz held a meeting and discussed various issues. A detailed briefing was also given on the number of workers and other issues including routes.

It was informed in the briefing that thousands of workers have arrived in Lahore from various places and other districts.

"We have made it clear to the government before we leave that any of our caravans should not be stopped or obstructed otherwise the outcome will be very bad," the leaders said.

Maryam Nawaz said that taking to the streets in such large numbers proved that this government has failed, adding that Imran Niazi and his team were upset to see these PML-N lions. Now these caravans are not going to stop, she said.