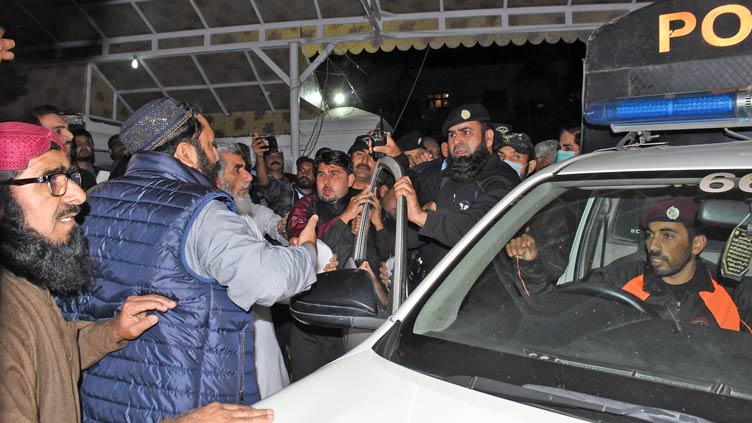 ISLAMABAD (Dunya News) – Police on Thursday conducted an operation in the parliament lodges hours after Ansar-ul-Islam of the Jamiat Ulema-e-lslam (JUI-F) set up camp inside the Parliament Lodges ahead of the no-confidence motion and arrested Jamiat Ulema-e-Islam-Fazl (JUI-F) MNA Salahuddin Ayubi and nine others.

The operation was launched hours after Ansar-ul-Islam, of the Jamiat Ulema-e-lslam (JUI-F) set up camp inside the Parliament Lodges. The group said that security will be implemented on the instructions of JUI-f chief Maulana Fazlur Rehman, saying they were there to protect opposition MNAs ahead of the assembly’s session for the no-confidence motion.

According to a tweet posted from their official account, he suspended the police officials in charge at D-Chowk under whose watch the Ansarul Islam workers had entered the lodges, Subsequently, he took charge of the operation.

The police stormed into the room of MNA Salahuddin Ayubi after breaking its doors. PPP MNA Agha Rafiullah also exchanged hot words with the police.

Pakistan Muslim League-Nawaz (PML-N) MNA Khawaja Saad Rafique received injuries during a clash with the police. He said that their meeting was underway when the police entered the Lodges, adding that the police is harassing the MNAs.

Speaking to the reporters, JUI chief Fazl who had also arrived at the Parliament Lodges to surrender himself before the police after the arrests of several workers and lawmaker. The JUI-F chief also directed his party workers to reach Islamabad.

Fazul Rehman also accused the government of trying to kidnap members of the opposition ahead of the vote on no-confidence motion moved by the joint opposition. “I ask all party workers to block roads and shut down businesses,” Fazl said.

He said that the police stormed into the room of MNA Salahuddin Ayubi and declared Islamabad DIG and IG responsible for the clashes.

Interior Minister Sheikh Rasheed said that police tried to resolve the matter via talks but they did not obey the orders.

He said that national security is the top priority of the federal government. Rasheed added that a terror threat was already issued in Islamabad.

The minister criticised the opposition for using the tactics after failing to get the support of the required number of parliamentarians for the no-confidence motion.

Minister for Information and Broadcasting Chaudhary Fawad Hussain says the attack of JUI-F’s force on Parliament Lodges is condemnable by all aspects.

In a tweet on Thursday, he said that Maulana Fazlur Rehman s armed group has reached Parliament Lodges to put pressure on parliamentarians.

He said the opposition will fail in its no-confidence motion against the Prime Minister.

The Minister said that the Speaker National Assembly has directed the Islamabad Police to take strict action against the facilitators of these groups and they will be dealt according to the law.

Former President of Pakistan and President Pakistan Peoples Party Parliamentarians, Asif Ali Zardari has strongly condemned the police raid and brutality in the parliament lodges and manhandling the parliaments.

President Zardari in a statement has said that the puppet Prime Minister is harassing the members parliament using terror. Attempts are being made to intimidate not only JUI members but all parliamentarians.

Police officers and administration should not follow illegal orders of puppets. He asked the parliamentarians to keep their spirit high. President Zardari said that the Niazi government is taking the last hiccups.

Pakistan Muslim League-Nawaz (PML-N) vice president Maryam Nawaz in her latest Tweet said, "Islamabad police should refrain from being tools of Imran Khan and his rapidly declining government." "Taking the blame for such madness-based actions is not appropriate. [You] will have to suffer losses," she added.