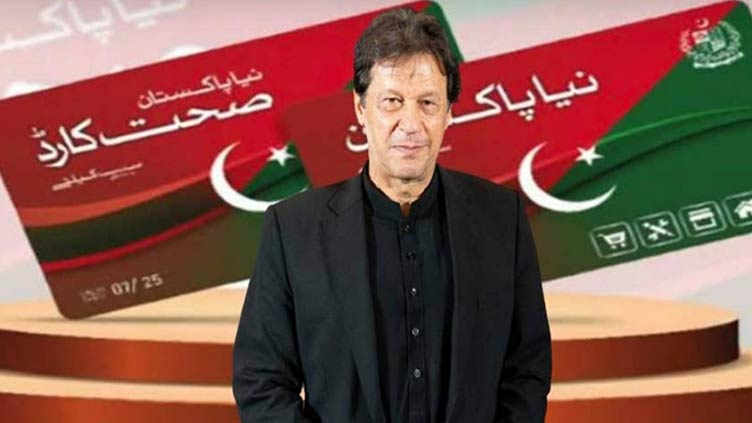 Under the scheme, all families of Islamabad, Punjab, Azad Jammu and Kashmir, Gilgit Baltistan and Tharparkar will be provided free medical treatment at government and private hospitals.

The card will enable every family to avail healthcare facilities up to one million rupees in a year.

Addressing the ceremony, the premier said that those who looted country’s money are undergoing medical treatment abroad. The entire family is sitting in London for treatment, he added.

PM told that the under this Sehat Card, every family will be able to avail healthcare facilities up to one million rupees in a year. Pakistan is the only country in the world to introduce such a unique ambitious program for providing free health facility to its citizens, he asserted.

Imran Khan said that the poverty-stricken people are facing problems in medical treatment due to lack of enough money.

Health issues create economic problems for the people and our vision behind this scheme is to at least relieve them of the economic suffering when they get ill, he went on to say.

The premier further said that Rs450 billion has been utilized for health insurance purpose, adding, courage and determination needed to take such steps.

He said when people own their country, only then the country achieves the ideal of national security but when people are deprived of their basic needs how would they think of the nation and national interest.

Meanwhile, Chief Minister Punjab Sardar Usman Buzdar briefed about the scheme and said all 36 districts of the province will be covered by the scheme by the end of March this year. He said Punjab government is spending 400 billion rupees for the scheme.

He said 23 new hospitals are being established in the province including 8 mother and child hospitals while 158 hospitals have been upgraded.

The CM said we want to make Punjab a model province in health sector.

He said for now this facility is for In-patients only but in future it will be expanded for outdoor patients.