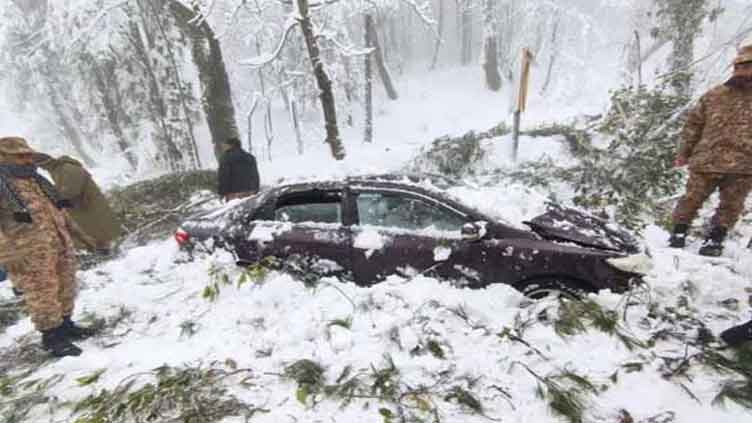 LAHORE (Dunya News) – The investigation committee on Murree tragedy has recommended to set up the management committee consisting of Deputy Commissioner and Army officer.

Earlier on January 8, the preliminary report of the tragic incident that took place in Murree was presented to Punjab Chief Minister Sardar Usman Bazdar.

According to sources, the report submitted to the Punjab chief minister said that Murree has the capacity to park 32,000 vehicles, while more than 72,000 vehicles entered Murree on Thursday.

Video shared on social media showed cars packed bumper-to-bumper, with one-metre-high (three-foot) piles of snow on their roofs. "The heavy snowfall caused a traffic jam and the closure of roads," Babar Khan, a tourist who was stranded for hours, said.

"Roads were also closed due to falling trees in many places.”
The website of Pakistan’s National Weather Forecasting Centre said heavy snowfall was expected in the area until Sunday afternoon, while Information Minister Fawad Chaudry said "decades" of weather records had been broken in the last 48 hours.

Prime Minister Imran Khan said he was shocked and upset at the tragedy.

"Have ordered inquiry & putting in place strong regulation to ensure prevention of such tragedies.”

Authorities warned last weekend that too many vehicles were trying to enter Murree, but that failed to discourage hordes of day trippers from the capital.

"It s not only the tourists, but the local population is also facing severe problems," Usman Abbasi, another stranded visitor said.
“Gas cylinders have run out and drinking water is not available in most areas -- it s either frozen or the water pipes have been damaged due to severe cold."

He said hotels were running out of food, and mobile phone services were patchy. "People are facing a terrible situation.”