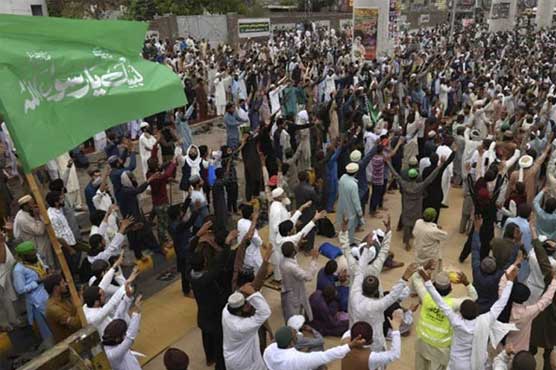 Approval will also be sought from the federal cabinet

LAHORE (Dunya News) – Interior Ministry has sent a summary of the Punjab government to the Law Ministry on the issue of removing the proscribed status of Tehreek-e-Labbaik Pakistan (TLP) and lifting sanctions.

According to sources, significant progress has been made on the issue of removing the banned status and lifting the sanctions imposed on the TLP. According to the federal government, the law ministry has recommended to present the summary in the federal cabinet.

Approval will also be sought from the federal cabinet after the Punjab government to remove the "banned" status of the TLP and lift the imposed sanctions.

An agenda will be set for next week s federal cabinet meeting or approval will be sought through circulation cabinet.

It is to be mentioned here that the Punjab Cabinet Committee on Law and Order had devised a plan to take the proscribed title of TLP off after government-TLP agreement.

The government had earlier declared the TLP as a "militant organisation" for creating unrest in the country after a series of violent clashes.