India's New Delhi came in third with a PM of 174, while Mumbai ranked fourth-worst city

LAHORE (Dunya News) – City of garden and cultural capital Lahore has once again topped the list of world’s most polluted cities.

"Lahore ranks the most polluted city in the world," according to air pollution data released by the US Air Quality Index on Monday. 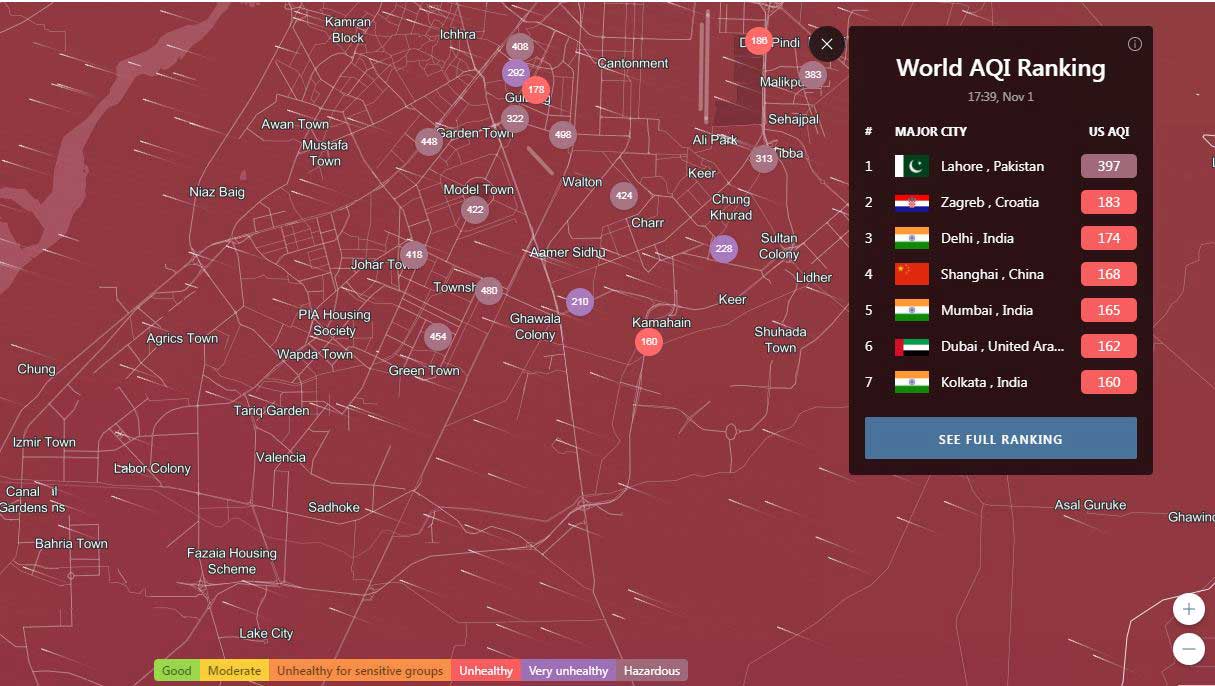 According to the index, Lahore reported a particulate matter (PM) rating of 397. New Delhi came in third with a PM of 174, while India’s Mumbai ranked the fourth-worst city with a PM of 165.

If the air quality is between 151 and 200, it becomes unhealthy, which also endangers the health of the common people. If the AQI is between 201 and 300, a health emergency should be declared immediately, while if the AQI is between 301 and 500, the general public may face severe health risks.

It is pertinent to mention here that smog is becoming a disease all over the world, smog is destructive to the heart and lungs as well as the brain. Even a slight increase in pollution greatly increases the risk of dementia.

As soon as the smog season begins, people with heart and respiratory diseases are advised to take special precautions, but perhaps very few friends know that it is also considered destructive to mental health.

According to experts, one microgram per cubic meter of pollutants in the air increases the risk of dementia by 16%. In this context, the citizens of Lahore need to be very careful that the highest rate of pollution in the country is generally recorded in Lahore.

Across many major cities, a hazy brown soup of pollution hangs over the skyline, especially in the warmer months. This is smog, known more specifically as ground-level ozone.

Smog is formed when industrial emissions from power plants, factories, cars, and other sources react with heat and sunlight in the atmosphere.

Why is it harmful?

When inhaled, smog irritates our airways, increasing our risk of serious heart and lung diseases. These health risks are why many cities monitor smog levels. On a high ozone-alert day, for example, your eyes and throat may burn, and you may cough and wheeze.

How can we reduce smog?

Smog is a nuisance in many places. Everyone can play a role in eliminating smog by adopting just a few habits, such as using electrical appliances instead of gas appliances, driving less, walking more, taking care of your car, changing the oil from time to time and Keep tire levels constant. The above precautions can reduce smoke emissions.