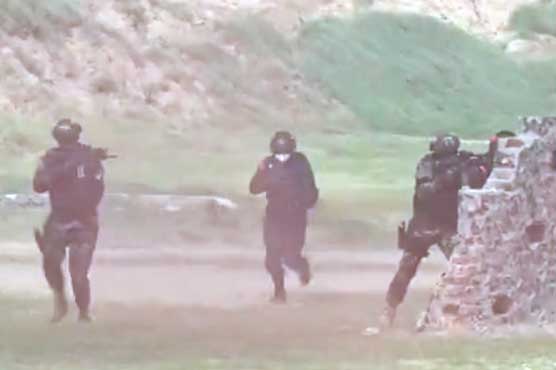 According to a statement released by the Inter-Service Public Relation (ISPR), the closing ceremony of the Joint Anti-Terrorist Exercise (JATE)-2021 was held at the National Counter Terrorism Centre (NCTC) Pabbi in Khyber-Pakhtunkhwa. Lieutenant General Shaheen Mazher Mehmood, Commander Central Command, was the chief guest on the closing ceremony.

“This is the first-ever military exercise conducted in Pakistan under the ambit of SCO RATS. The exercise focused on enhancing cooperation and cohesiveness in combating international terrorism,” the ISPR maintained

The ISPR stated that Chinese and Pakistani troops participated in the exercise and shared their experiences of capacity building and innovative approaches/methods on emerging technologies being used to counter the evolving threats.

Chinese and Pakistani troops took part in the closing ceremony of the Joint Anti-Terrorist Exercise at the National Counter Terrorism Centre in Pabbi, Khyber-Pakhtunkhwa.