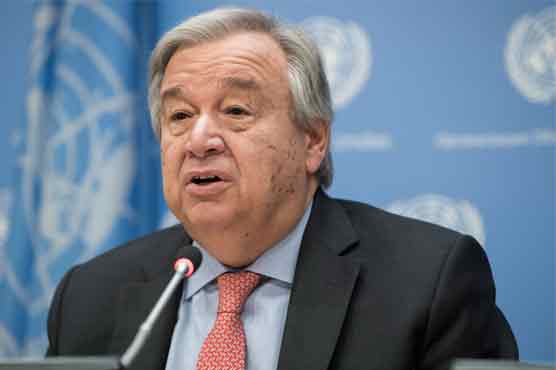 "With their offers and commitments, they have made a great contribution to the safety and security."

“The Secretary-General is indeed very grateful for the generosity of member states – including Pakistan, Denmark, Kazakhstan, North Macedonia, Poland, Qatar, the United Arab Emirates and the United States — who have made available facilities and arrangements in support of continuing UN operations in Afghanistan,” his Spokesman Stephane Dujarric said at the regular noon briefing at UN Headquarters in New York.

“With their offers and commitments, they have made a great contribution to the safety and security, operational delivery, and overall continuity of UN activities,” Dujarric told reporters.

The spokesman said that UN humanitarian officials in Afghanistan have warned that the war-torn country is facing a food insecurity and malnutrition crisis. A third of the population — more than 12 million people — are acutely food insecure and their situation is expected to be greatly worsened by the drought – which has impacted a third of the country.

The officials, according to the spokesman, noted that as an economic crisis looms, job opportunities also remain limited across the country. They added that the 2021 harvest is expected to be below average, and the next lean season is expected to be more intense and arrive earlier.

There is also a need to address water scarcity to prevent displacement and reduce hunger, it was pointed out. At the beginning of 2021, nine million people were already in need of water, sanitation, and hygiene assistance in Afghanistan.

“Along with our humanitarian partners, we have been working to respond to the impacts of low rainfall on water availability, crop yields, agricultural labour opportunities, as well as affordability of food since the beginning of the year,” Dujarric said.

In the first six months of the year, he said the UN has provided food and livelihood assistance to more than 5.5 million people, many of whom are in drought impacted areas, but much more is needed.

In certain parts of the country, the full impact of the drought is yet to be felt, he said. In the last few (months), many farmers have been unable to access their fields due to conflict at critical times for planting and harvesting.

Afghanistan’s 2021 Humanitarian Response Plan, which requires $1.3 billion to help more than 18 million people, is 40 per cent funded, leaving a deficit of $766 million, he said.

For its part, the UN Refugee Agency Friday said that it was seeing no large influx of refugees trying to access the borders to Pakistan and Iran. However, UNHCR said that a displacement crisis is, in fact, taking place inside Afghanistan.

They warned that without the entry of trade and support, this could lead to a major crisis and that the international community should not turn a blind eye to Afghanistan, and the Afghans people.