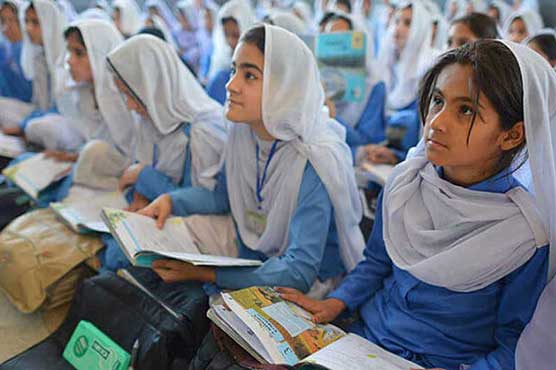 ISLAMABAD (Dunya News) – The National Curriculum Council (NCC), Ministry of Federal Education & Professional Training in consultation with Education Departments of all federating units of the country, is developing Single National Curriculum (SNC) from grade one to 10 in line with the vision of the Prime Minister of Pakistan.

According to a three years performance report of ministry of federal education and professional training on Thursday, the SNC would be taught in public and private schools in addition to Deeni Madaris.

It was further shared that the government has launched the Rehmatul-lil-Alameen scholarship program for the students hailing form low-income groups of Pakistan.

Under the National Endowment (NEST) Scholarship for Talent was a need-based scholarship program that was to be targeted towards deserving students of the arts and humanities to promote a diverse range of learning in secondary and higher education in Pakistan.

NEST was aimed to support the study of fine arts, visual arts, film & TV, interior & textile design, and a variety of other disciplines to ensure culture of education in Pakistan as vibrant and multi-disciplinary.

In wake of COVID-19, the government was ensuring 100 percent vaccination in all educational institutions, departments, and offices.

During COVID-19, the federal government was handling all decisions regarding resumption of academic activities such as physical examination, and the admissions of students.

The pilot project was launched in Islamabad where 11,000 children identified as out of school in Islamabad Capital Territory (ICT).

Under the initiative, around 7183 out of school children were enrolled in mainstream educational institutions of federal directorate of education.

Moreover, in FY 2020-21, the Ministry has started a new project to introduce new steam of education at Matriculation level i.e., technical education.

The Ministry has aired TeleSchool, and Radio school with already developed contents provided by different organizations to facilitate students hailing from remote regions.

Around eight intervention areas were also identified in a comprehensive “Skills for All” strategy, notified by the Ministry. While 14 components of “Hunarmand Pakistan” Program under PM’s “Kamyab-Jawan” was an initiative identified for implementation.

Inter Board Committee of Chairmen (IBCC) had established mechanisms to address grievances of students through emails, an active Facebook page, a live chat Messenger on the website, an updated website and contact information, as well as a call center.

Highlighting the three years performance of Federal Board of Intermediate and Secondary Education (FBISE) it was told that 859 complaints were received through Complaint Cell developed by Federal Government “Pakistan Citizen Portal”. Out of which 857 complaints have been resolved.

The Federal Board had also upgraded the online services to submit online applications for verification of documents and duplicate documents.

Sharing the details of new initiative being taken by the incumbent government, the report said for next FY 2021-22 the federal government announced Rs. 66.25 billion in budget speech and an additional amount of Rs. 15.00 billion was pledged. Thus, increasing the recurring grant by 26.76% for last year.

To provide high standard sport facilities, this government was collaborating with universities to develop high end sports arenas for students and other youths as well.

For this purpose, initially three universities were selected and Rs.1.0 million would be released to each university in FY 2021-22, it added.