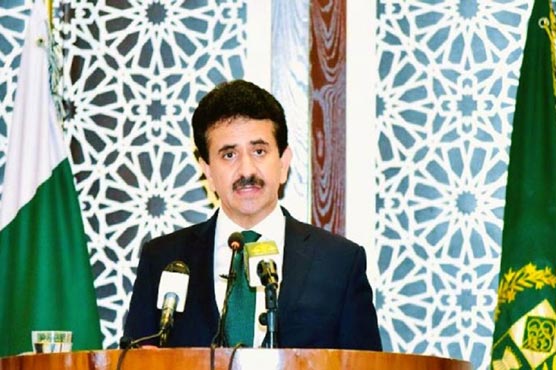 ISLAMABAD (Dunya News) - Pakistan has reiterated that Kashmir never was and never will be a part of India.

He said the Indian External Affairs Minister has made unsubstantiated and self-serving remarks about the situation in the Indian Illegally Occupied Jammu and Kashmir.

The spokesperson said as for Indian false propaganda of the so-called Democracy, Development, Good Governance and Empowerment in the occupied territory, the international community has seen the most unprecedented military siege, gross and systematic human rights violations, and curbs on all fundamental rights and freedoms of the Kashmiri people in IIOJK.

He said India has taken a series of illegal steps for further disempowerment and disenfranchisement of the already deprived and oppressed Kashmiri people, including illegal changes in demographic structure of IIOJK and farcical exercise of delimitation of constituencies to turn the Kashmiris into a minority in their own land.

He said ultimately, India will have to give in to the will of the Kashmiris and the commitment of international community as enshrined in numerous UNSC Resolutions.

Chargé d Affaires of the Indian High Commission in Islamabad was called to the Foreign Office today and conveyed a strong demarche to register the Government of Pakistan s unequivocal rejection of India s illegal and unilateral actions since 5th August 2019, and continuing military siege and human rights violations in the Indian Illegally Occupied Jammu and Kashmir.

In a statement, Foreign Office Spokesperson Zahid Hafeez Chaudhri said that two years had been passed since these actions were taken which breached international law, UN Charter and the 4th Geneva Convention as well as several resolutions of United in Nations Security Council on the Jammu and Kashmir dispute.

The Chargé d Affaires was reminded of Pakistan s consistent stance that the Government of India must reverse its illegal and unilateral actions of 5 August 2019; immediately lift its inhuman military siege in IIOJK; stop its illegal measures to change the demographic structure of the occupied territory; cease extra-judicial killings of Kashmiri youth in fake encounters and cordon-and-search operations; release the illegally detained Kashmiri youth and political leadership; withdraw over 900,000 occupation troops from IIOJK; and let Kashmiris exercise their inalienable right to self-determination through a fair and impartial plebiscite under auspices of the United Nations as enshrined in the relevant UN Security Council Resolutions.