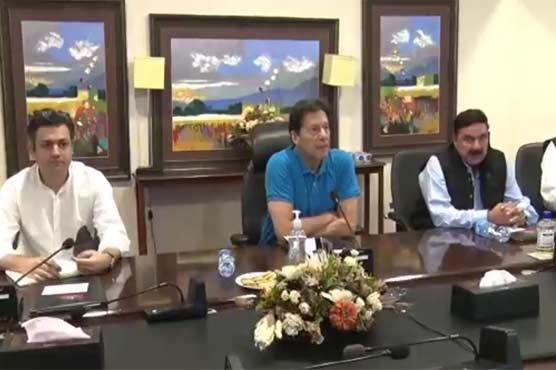 ISLAMABAD (Dunya News) - Prime Minister Imran Khan said that China Pakistan Economic Corridor (CPEC) would not only ensure economic prosperity of Pakistan but also development of the entire regional development hinged over it.

The prime minister was chairing a meeting to review the progress on CPEC projects and the promotion of investment.

During the meeting, the prime minister said that strategic partnership ties between Pakistan and China had been unmatched throughout the world.

For further strengthening of these ties into economic relations, he stressed upon promotion of bilateral investment in different sectors with provision of facilities to investors.

The meeting was attended by interior minister Shaikh Rashid Ahmad and federal ministers including Hammad Azhar and Khusru Bakhtiar.

The meeting discussed in detail, the investment under CPEC, facilities extended to the Chinese investors, related issues and the steps for their resolution.

The prime minister directed for immediate removal of issues being faced by the Chinese investors regarding issuance of long-term visas.

The meeting also considered introduction of separate category for the people associated with the CPEC and the prime minister directed the ministry of interior to submit a summary before the cabinet in this regard.

The establishment of green channel to facilitate investors also came under discussion.

The Board of Investment authorities apprised the prime minister of the facilities being provided to the Chinese investors.

The prime minister stressed upon removal of hurdles on priority basis in way of investment and provision of all possible incentives to the investors.

He also directed the board of investment to formulate a comprehensive plan in consultation with the business community to increase foreign investment for the purpose of increasing exports in different sectors.