Pakistan Army, as emergency responders, will help civilian bodies to implement the SOPs.

Addressing a press conference on Monday, he said that Pakistan Army, as emergency responders, will help civilian bodies to implement the SOPs. He said Army has been called in under Article 245 of the Constitution to assist civil administration and law enforcement agencies to prevent spread of the Covid-19 pandemic. He said a brigadier level officer will head the army troops at divisional level, while an officer with the rank of Lt Colonel will serve at district level. He said Pakistan Army will not claim any kind of internal security allowance for its services in containing the contagion.

The DG ISPR also provided details of the coronavirus situation in the country and added that the government has asked the armed forces to assist the implementation of coronavirus standard operating procedures (SOPs). 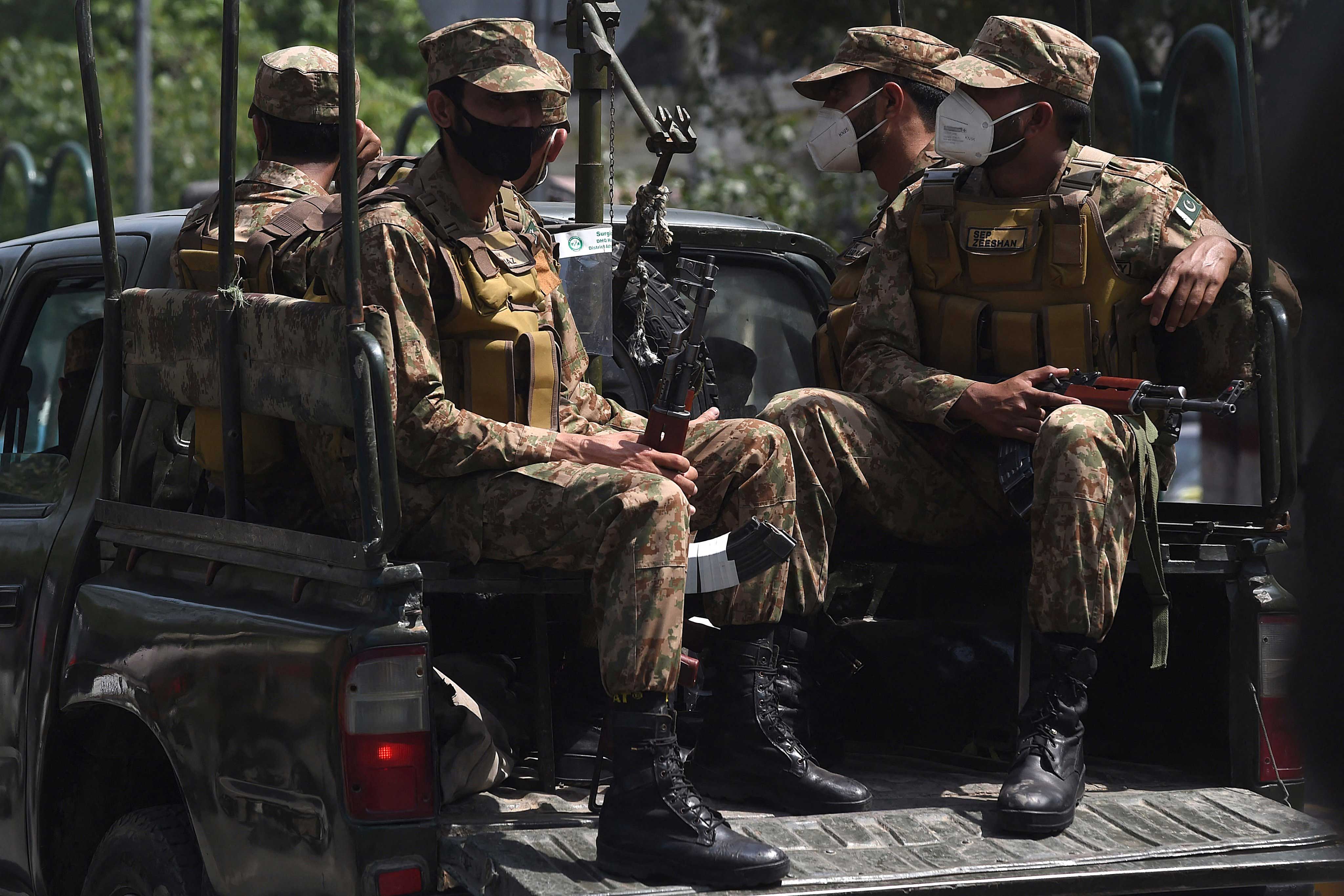 Major General Babar Iftikhar said that the army has been deployed in 16 affected cities of the country in view of the growing threat of the coronavirus pandemic.

He said that the number of deaths were increasing on a daily basis amid third wave of coronavirus in Pakistan, adding that there were 90,000 active cases of Covid-19 in Pakistan.

“The Pakistan Army jawans will provide full support to other law enforcement agencies in the country,” he said.

Maj Gen Babar Iftikhar said 75 percent of oxygen has been reserved for the health sector and if situation aggravates the oxygen meant for industrial sector will also be diverted to hospitals to save lives. He said there are around 90,000 active Covid cases in Pakistan, while positivity ratio of these cases is higher than five percent in 51 cities. He said this ratio is higher in 16 cities, which include Islamabad, Lahore, Rawalpindi, Multan, Hyderabad, Quetta, and Muzaffarabad. He said ventilator occupancy has reached to 90 percent in some of the cities. He said so far 17,187 people have died of Covid-19. 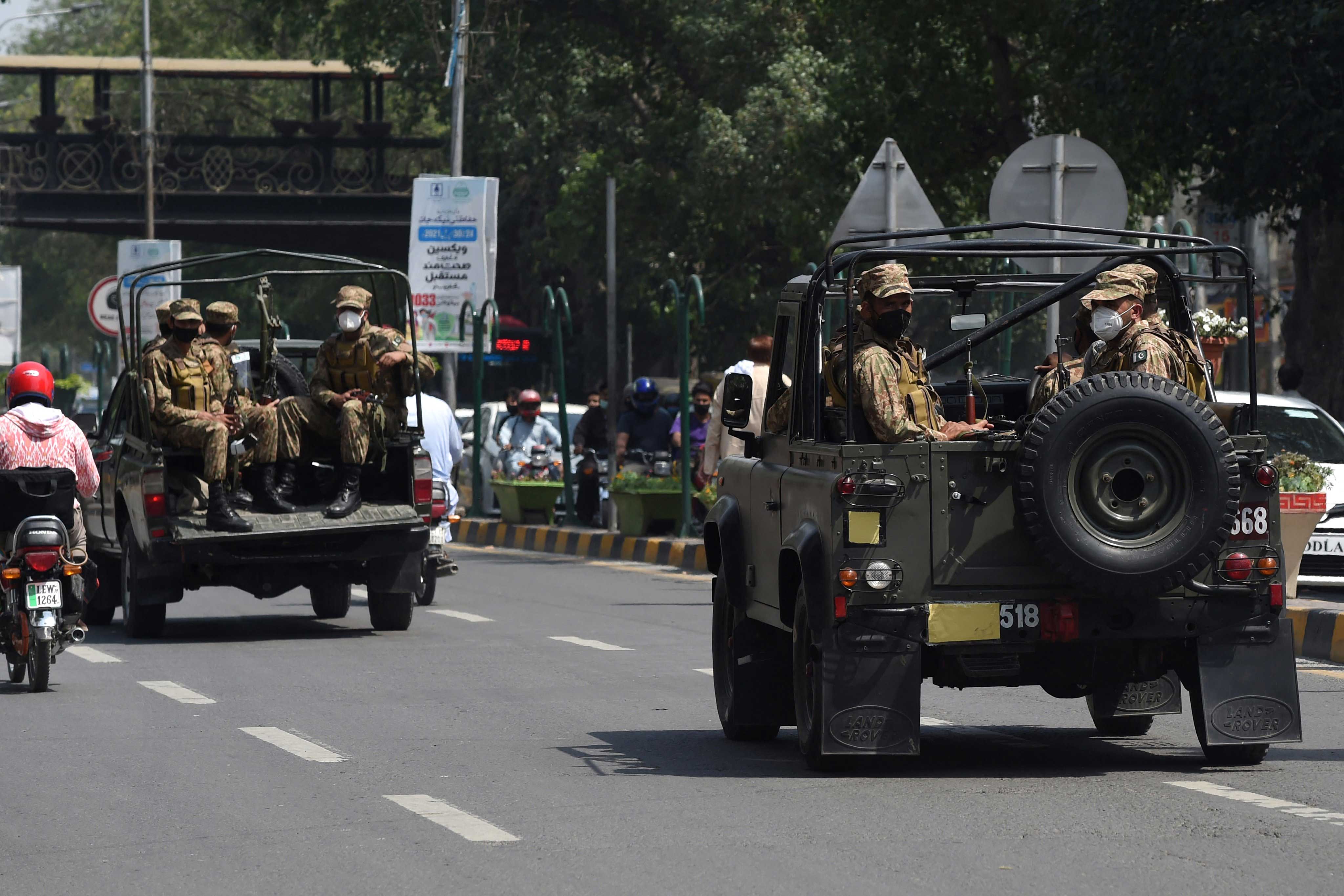 The DG ISPR said nation’s trust is asset of the armed forces of Pakistan and they will not disappoint the people of Pakistan in this hour of need and will take every possible step to secure lives of the masses. He called for collective responsibilities of observing Standard Operating Procedure like wearing face mask and maintaining social distance to avoid spread of the virus. He said by strict compliance of SOPs at homes and mosques, during Ramadan, we can help one another in this critical time. 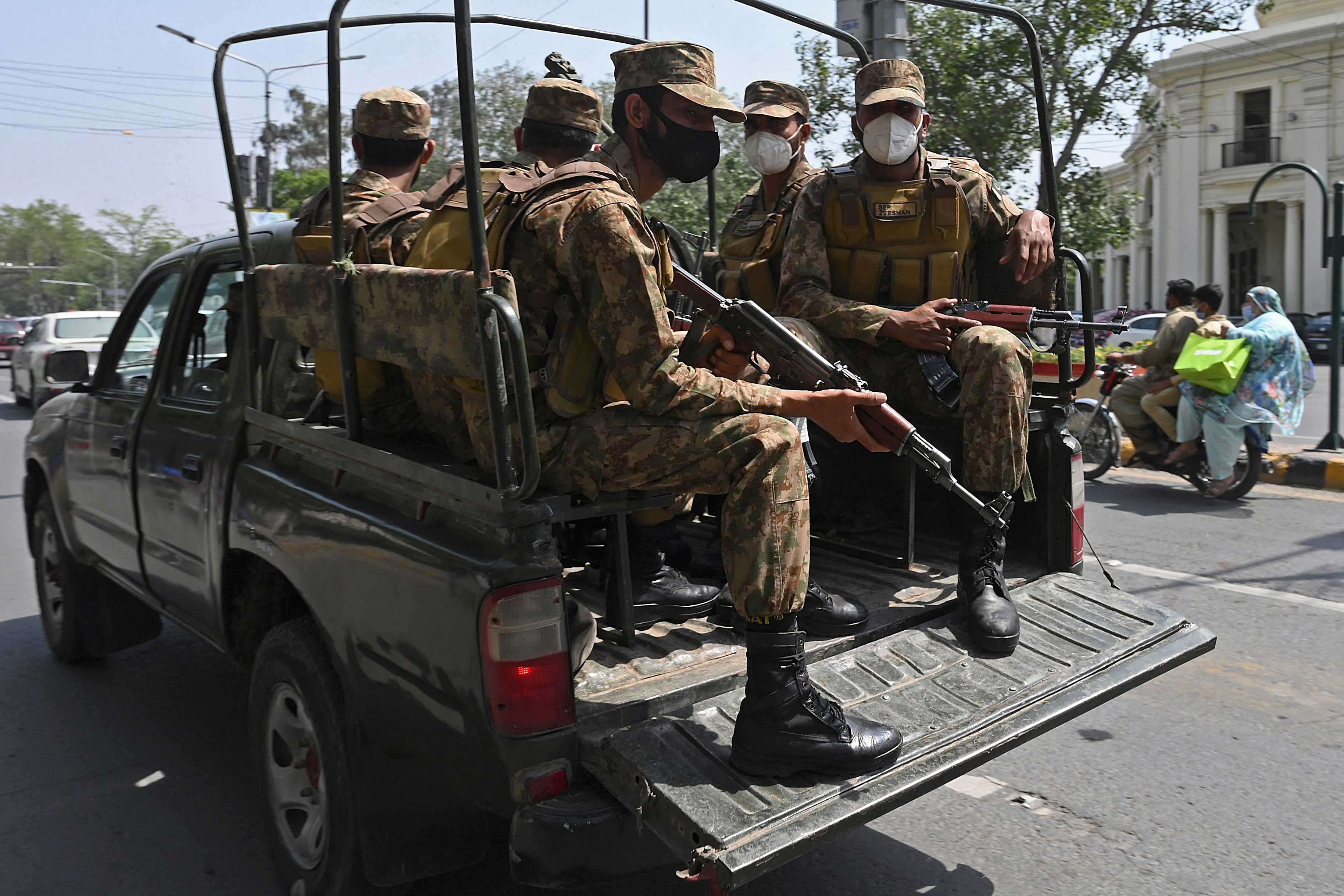 The DG ISPR said,”The average death rate from the coronavirus in April was the highest.” Since February 26, 2020, he said,17,187 people had died due to the pandemic. “At present, the global case fatality rate (CFR) due to the coronavirus is 2.12 per cent, while during this pandemic wave, the CFR in Pakistan has increased to 2.16 per cent for the first time as compared to the world.”

He mentioned that an important meeting of the National Coordination Committee (NCC) was held on April 23 under the chairmanship of Prime Minister Imran Khan in which Chief of Army Staff General Qamar Javed Bajwa was also present.

With the consultation and mutual consent of all the stakeholders, he said, the NCC had taken some important and timely decisions regarding non-pharmaceutical interventions (NPIs or alternate measures to treat the disease other than medical treatment) to control the third wave of coronavirus pandemic. 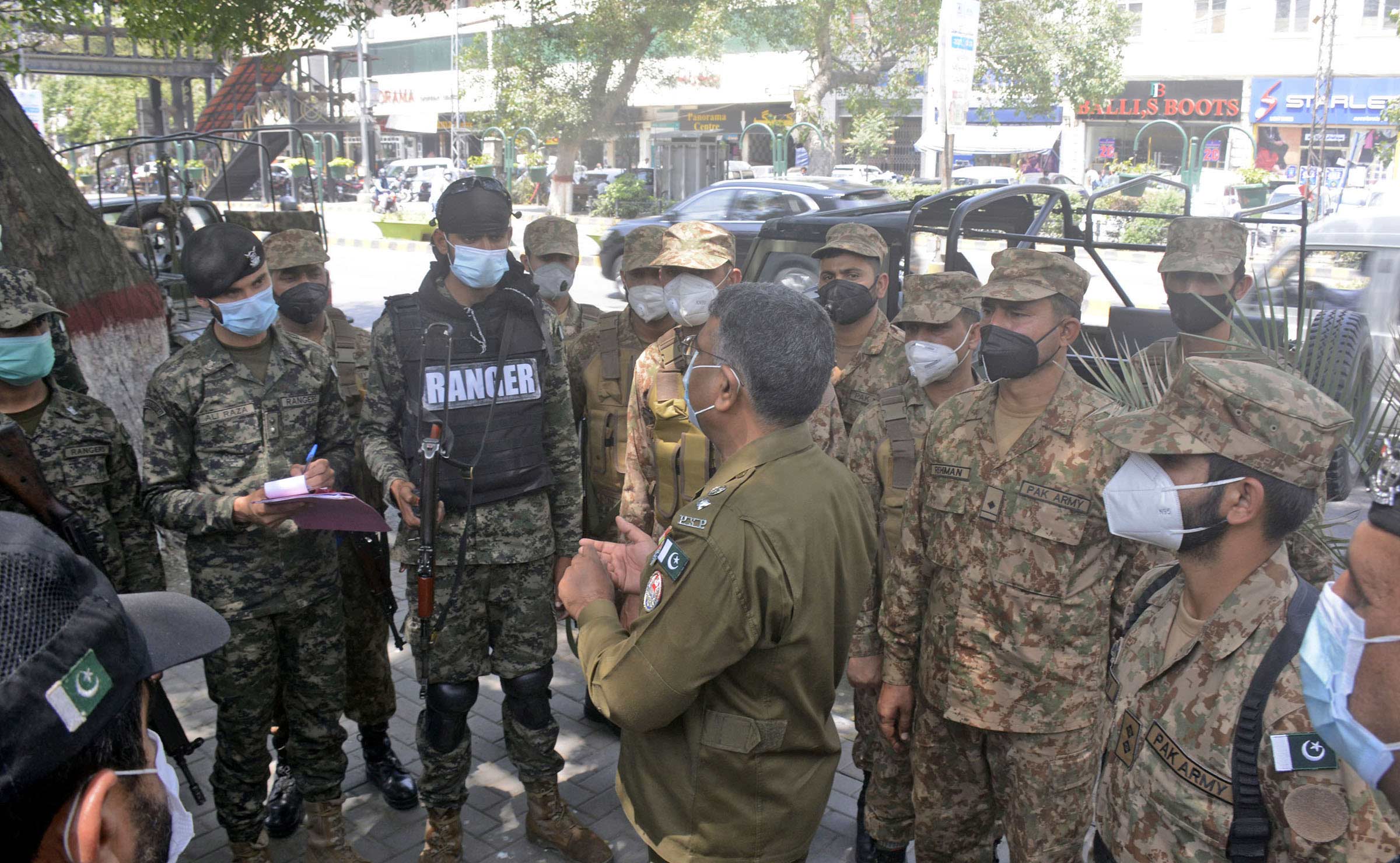 The implementation of precautionary measures was an effective response to the pandemic stemming its outrageous spread, he added.

“We must all work together individually and collectively to ensure the health and safety of the people,” the DG ISPR urged the nation.

“We can be safe from this contagion only by following the safety guidelines regarding the use of face mask and social distancing,” he said. 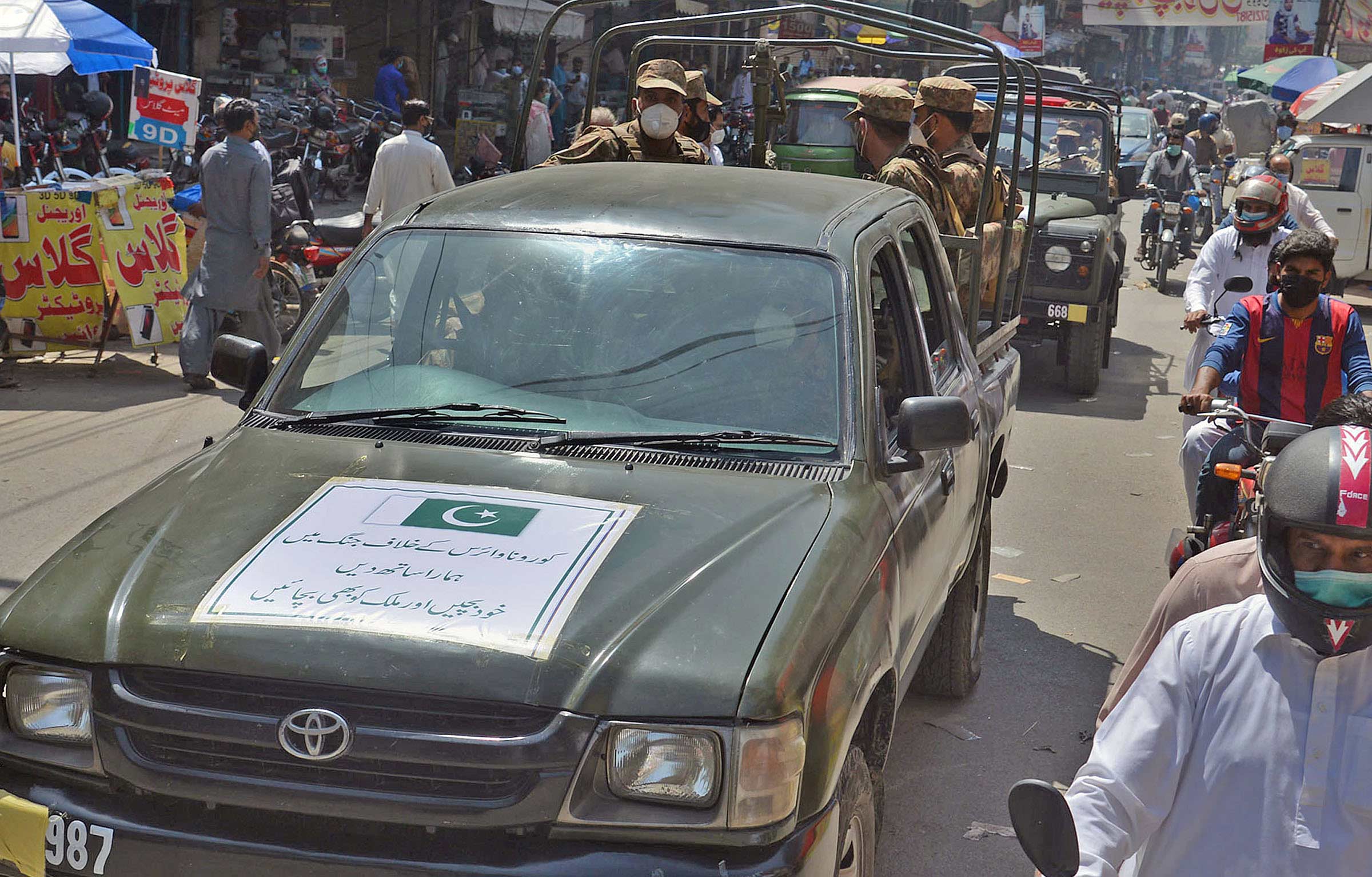 The blessed month of Ramazan, he said, “teaches us compassion and discipline. We can remedy each other’s problems by ensuring safety measures in homes, mosques and all other places.”

The DG ISPR said the cooperation and sense of responsibility of the people since the beginning of the pandemic had protected the nation from its most dangerous harms as compared to other countries and still as a nation “we have to show more caution and responsibility than ever before”. 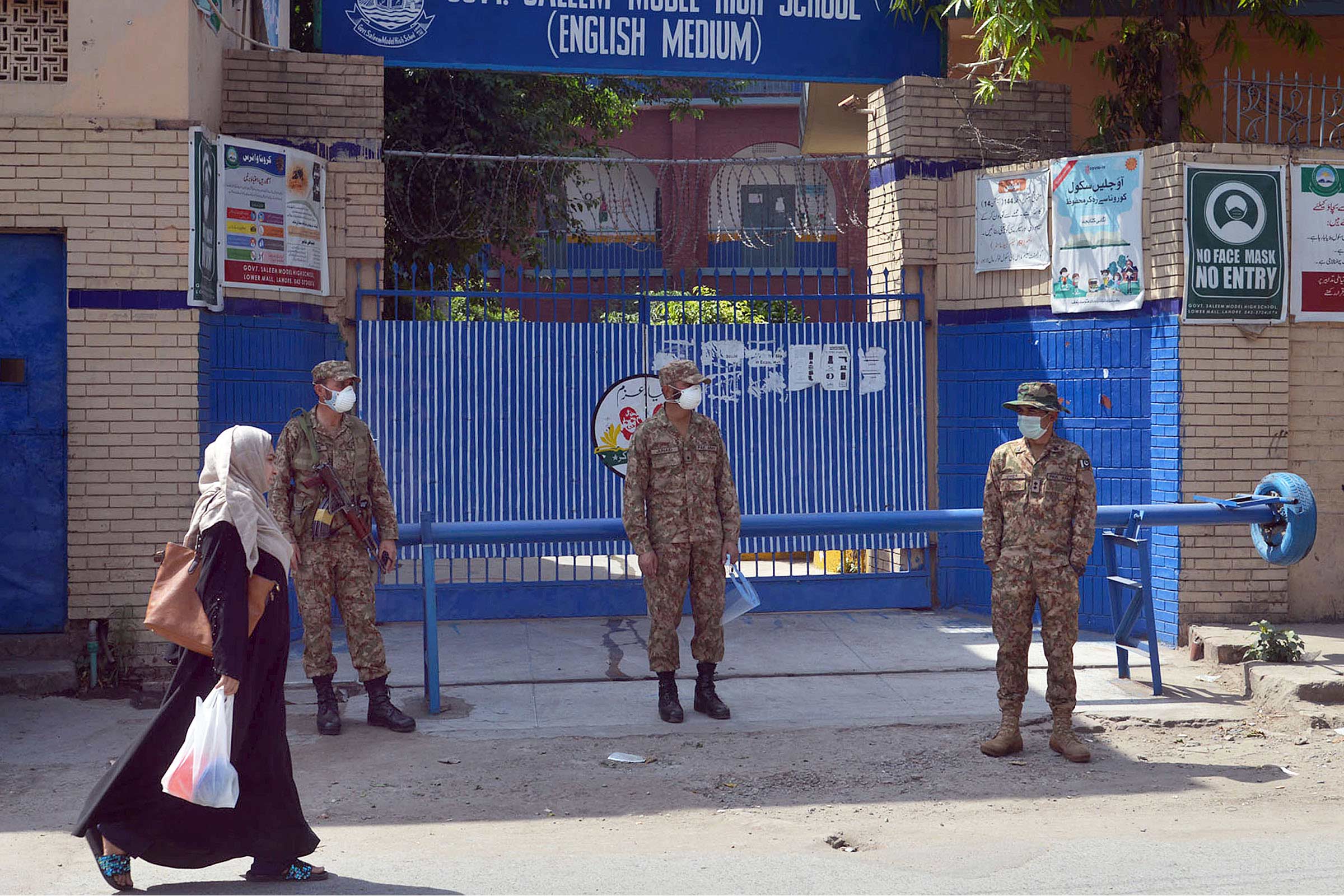 He urged the masses to show compassion towards the people around them during the month of Ramazan. He concluded the talk praying to The Almighty to protect everyone from the pandemic.”May Allah Almighty grant success to all those who are engaged in saving the lives of others without caring for their own lives. Ameen.”

On Sunday, the federal government had issued notifications for the deployment of Pakistan Army troops and Rangers in Punjab and Frontier Corps security personnel in Khyber Pakhtunkhwa for strict implementation of Standard Operating Procedures to prevent the spread of Coronavirus in the province.

The notifications had been issued on the requisition of Punjab and KP governments and subsequent decision taken at the meeting of National Coordination Committee held last Friday.

Meanwhile, on the other hand, Pakistan’s confirmed COVID-19 cases have crossed 800,000 mark as the nationwide tally of fatalities has jumped to 17,187 on Monday.

According to the latest figures by the National Command and Operation Center (NCOC) 4,825 persons tested positive for COVID-19 in the past 24 hours.

Punjab remains the worst-hit province in terms of deaths and cases followed by Sindh and Khyber Pakhtunkhwa.